Observer > 2011 > February > Getting Outside Myself to Help the Thai People 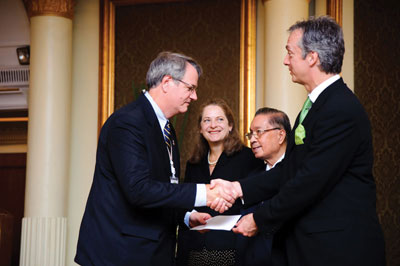 Bruce Svare, former Fulbright senior scholar to Thailand, is recognized for his fund-raising efforts on behalf of the Thai-U.S. Educational Foundation (TUSEF). Pictured are, from left, Svare, Deputy U.S. Secretary of State Alina Romanowski, His Eminence Manaspas Xuto, former Thai ambassador to the United States and adviser to the Thai minister of foreign affairs, and U.S. Ambassador to Thailand Eric John. Svare is an APS Fellow and professor of psychology and neuroscience at the State University of New York at Albany.

APS Fellow Bruce Svare reflects on his time in Thailand

Those of us in higher education have a tendency to develop tunnel vision and become overly focused on our professional careers as scientists. When world problems remote from our homes become the lead story in news reports, we often pay only brief attention.

That was me until 2004, when a tsunami struck Phuket, Thailand.

While trained psychologists descended on the country to provide needed assistance and comfort, I learned that the field of psychology was in its infancy in Thailand. Most universities had little in the way of a formal psychology curriculum, and the profession of clinical psychology and the role it plays in the diagnosis and treatment of mental illness was almost nonexistent.

In 2006, I was given an opportunity to help. I was named a Fulbright senior scholar to Thailand, with the year-long mission of promoting the development of psychology in the Thai higher education system. I taught behavioral neuroscience and assisted with curriculum development at Chulalongkorn University in Bangkok, and I also lectured at other universities and medical schools.

Behavioral neuroscience is critical for understanding the biological basis of both normal and disordered behavior. My ultimate hope is that my Fulbright work will have a positive impact on the growth of psychology in Thailand, the future training of Thai clinical psychologists, and the continued development of their mental health care system.

My love for the Thai people and their rich cultural heritage continues to grow with each return visit. I have spearheaded fund-raising efforts in the United States to enable more Fulbright scholars to come to Thailand to teach and conduct research. When I attended the 60th anniversary celebration of the Fulbright Program in Thailand, I was one of only a few former Fulbrighters given the honor of describing my mission to Her Royal Highness Princess Sirindhorn.

Observer > 2011 > February > Getting Outside Myself to Help the Thai People