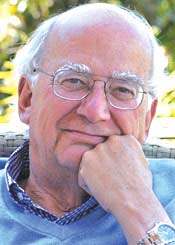 Widely considered to be one of the fathers of the field of cognitive neuroscience, APS Past President Michael Gazzaniga will give the keynote address at the 25th APS Annual Convention in Washington, DC, on “Unity in a Modular World.” Gazzaniga is credited with being the first researcher to examine split brain patients in order to understand whether some cognitive functions are predominantly performed in one brain hemisphere or the other. Gazzaniga’s examination of split brain patients and his contributions to the field have greatly enhanced our understanding of lateralization of cognitive function within the brain, and how the two brain hemispheres communicate.

“Fifty years of split-brain studies have led me to a long-term view on how to best understand mind/brain interactions,” he says. “Overall, the view is consistent with the idea that complex neural systems, like all complex information processing systems, are highly modular. At the same time, how the modules come to interact and produce unitary goals is the great unknown.”