Regardless of your political leanings, you’re probably very familiar with the names Barack Obama, George W. Bush, and Bill Clinton. You probably also know that these names represent the three most recent US presidents (#44, #43, and #42, respectively). But how often do you think about Franklin Pierce? Or Benjamin Harrison? These men also occupied the Oval Office, and yet they seem to have faded into obscurity.

In a new research report published in Science, APS Past President Henry L. Roediger, III and K. Andrew DeSoto of Washington University in St. Louis present two studies that investigate how presidents are forgotten from collective memory. As the researchers note, most studies exploring collective memory focus on how people remember significant historical events, such as the Holocaust or the attacks on 9/11. Investigating the similarities and differences in how different people recall the same event has revealed many factors that can shape collective memory, including emotion, salience, rehearsal, and imagery.

With this new research, Roediger and DeSoto demonstrate that an empirical, theory-driven approach can also be used to understand how and why things are forgotten from collective memory. 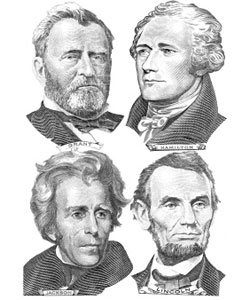 In the first study, they examined data from three groups of college students, collected more than 15 years apart in 1974, 1991, and 2009. Each student was given a paper with numbers and was asked to remember as many US presidents as he or she could, writing the names next to the numbers representing their chronological order (i.e., #3 = Thomas Jefferson). The students were told to guess or write the name to the side of the page if they could remember a president’s name but not his number.

All three groups tended to remember the first presidents, an example of the so-called primacy effect; they also tended to remember the most recent nine or 10 presidents, known as the recency effect. The students also showed enhanced recall for Abraham Lincoln, a president with incredible historical significance, and his two successors, Andrew Johnson and Ulysses Grant. Memory for the other presidents in between the first and most recent groups, however, was consistently poor across the three groups.

Forgetting seemed to level off for the presidents up to and including Calvin Coolidge, suggesting that those presidents would not be subject to further forgetting. But differences in recall between the three groups for subsequent presidents allowed Roediger and DeSoto to estimate the rates at which the presidents are likely to be forgotten. Their results indicate that Harry Truman, Lyndon Johnson, and Gerald Ford are fading fastest, while John F. Kennedy is likely to stick around longer in collective memory.

In a second study, the researchers tested recall in three age groups of adults — Millennials, Generation X, and Baby Boomers — all in May 2014. Not only was recall very similar across the three age groups, recall in the second study also showed a pattern very similar to that seen in the first study. In fact, data from people who represented roughly the same generations across the two studies (e.g. 1974 college students and Baby Boomers tested in 2014) were highly correlated.

“These strong correlations indicate that serial position curves in recall of US presidents are remarkably similar and stable across age and across generations spanning 35 years,” Roediger and DeSoto write. “This outcome is surprising because one might have supposed that college students, all of whom had taken US history in high school a few years previously, might have an advantage relative to older adults.”

Together, these findings show that our memory for US presidents, despite their tenures as Commander in Chief,  is subject to the same fundamental biases and limitations that lead us to forget many of the things we learn and experience throughout life.

As APS Fellow David C. Rubin of Duke University notes in the perspective piece that accompanies the research report, “By combining careful measurement techniques with the study of events that span centuries, Roediger and DeSoto demonstrate the potential for the scientific study of the transmission and retention of cultural knowledge based both on exposure and the mechanisms that shape human memory.”