Many of the most influential financial decision makers in our society from business to politics happen to be middle-aged. The average age of Fortune 500 chief executive officers and chief financial officers is around the mid-fifties. Historically, the average appointment age of Federal Reserve Chairs and National Economic Council Directors is also in the fifties. The number is not an artifact of averaging; all current members of the Council of Economic Advisers and half of the National Economic Council members are fifty-something. Is there some sort of peak of financial reason in the fifties? Recent research in economics, psychology, and neuroscience suggests that there may be.

In an analysis of financial mistakes across a range of credit behaviors (e.g., suboptimal balance transfers, fee payments, etc.), a recent paper identified the age around where mistakes are minimized as 53 (Agarwal, Driscoll, Gabaix, & Laibson, 2009). Heavily influenced by classic work in the psychology of aging on fluid and crystallized intelligence (Horn & Cattell, 1967), the authors presented a model of how financial decision-making performance may be influenced by divergent changes in cognitive abilities over adulthood. The idea is that the youngest and oldest decision makers make mistakes for different reasons. The young are cognitively robust but inexperienced; the elders can draw on a lifetime of experience but are limited in some fluid cognitive abilities. The peak in middle age is at a sweet spot where individuals have not suffered much fluid decline but also have decades of life experience.

Importantly, the evidence is not limited to credit behavior. In general, increases in risky financial mistakes at older ages have been linked to limitations in fluid cognitive ability and age differences in frontostriatal network structure and function. A meta-analysis of behavioral studies on risky decision making and aging reveals the larg­est age differences for decisions that depend on learning in a novel environment (Mata, Josef, Samanez-Larkin, & Hertwig, 2011). A series of recent neuroimaging studies has focused on age differences in risky financial decision making (Samanez-Larkin & Knutson, 2014). These studies have shown that subcortical regions like the ventral striatum, which reliably activate in older adults in simple reward tasks (Samanez-Larkin et al., 2007), show ir­regular functional activity in old age in decision tasks that depend on recent learning (Chowdhury et al., 2013; Samanez-Larkin, Kuhnen, Yoo, & Knutson, 2010). Evidence from structural imaging suggests that the learning-related decision impairments and neural signal irregularities are associated with reduced white matter integrity in frontostriatal circuits (Chowdhury et al., 2013; Samanez-Larkin, Levens, Perry, Dougherty, & Knutson, 2012). Together, the findings suggest that basic striatal function may remain preserved over adulthood, but that broader network disruption may underlie the fluid cognitive limitations on making wise decisions in an uncertain and novel environment. Based on these findings, studies are beginning to test various “decision aids” that may provide external environmental support to compensate for limitations in fluid cognition (Samanez-Larkin, Wagner, & Knutson, 2011b). 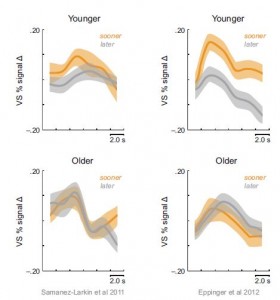 Figure 1. In two recent studies, young adults show reduced activation of the ventral striatum (VS) for delayed rewards (grey) compared to rewards
available now (orange), whereas this oversensitivity to immediacy was not present in older adults. Older adults showed equivalent activation of the VS for rewards available at short and long delays. Figures adapted from Samanez-Larkin et al. (2011) and Eppinger et al. (2012).

However, in many situations, crystallized intelligence compensates for reduced fluid cognitive abilities without the need for external environmental support. There is growing evidence of preservation or even improvement in old age for decisions that depend on accumulated life experience (Li, Baldassi, Johnson, & Weber, 2012). One example is intertemporal choice. A review of the behavioral literature reveals that older adults are often more willing to wait over short-time delays for a larger amount of money compared to a smaller amount of money available immediately (Löckenhoff, 2011). Recent neuroscience research suggests that the accumula­tion of experience with delayed rewards over the life span may serve to tune activity in regions like the ventral striatum. In two recent datasets, the strong sensitivity to immediately available rewards in the striatum in young adulthood is reduced in older age (Figure 1); older adults show similar activity for rewards available now or later (Eppinger, Nystrom, & Cohen, 2012; Samanez-Larkin et al., 2011a). One interpretation is that it is as if the older folks know that $20 is going to be just as good in two weeks as it is today. The twenty-somethings just haven’t had the opportunity to realize interest rates over decades and appreciate the long-term rewards of waiting. This may be a situation where we should be trying to get those impatient young people to make decisions more like the older folks. A fascinating series of recent studies is doing just that; increasing the connectedness of younger people to their older selves (e.g., using virtual reality) reduces temporal discounting and increases savings in early life (Hershfield, 2011).

Figure 2. Fluid cognitive abilities decline across adulthood (blue line) while crystallized cognitive abilities improve (orange line). The dependence of decision performance (green line) on these two sets of abilities varies across contexts. For decisions that require flexible learning in a new situation (fluid), older adults may be at a disadvantage (left). When decisions can be made largely based on knowledge and experience (crystallized) older adults may make better decisions than young adults (right). Figure concept adapted from Agarwal et al. (2009).

The evidence for declines in learning-based risky decisions and improvement in intertemporal decisions in old age is consistent with the model Agarwal and colleagues adapted from Horn and Cattell. It also suggests that the model can be flexibly adapted to explain decision behavior across a range of contexts. Decision-performance differences across adulthood are heavily dependent on the specific cognitive demands or opportunities for drawing on prior knowledge in different contexts (Mata et al., 2012). An extension of the model from Agarwal and colleagues suggests that in situations that are more dependent on fluid ability, performance will be worse in old age; in situations with greater opportunity to rely on crystallized skills, performance will be better in old age (Figure 2).

In addition to identifying potential psychological and neural mediators of age differences in financial decision making, an emerging focus of research in this area has been to examine how well behavior in the lab or the brain scanner is related to decision making in everyday life. Several studies have linked performance on labora­tory tasks to measures of financial well-being in everyday life such as accumulated assets, avoidance of debt, debt-to-assets ratio, and credit scores (Knutson, Samanez-Larkin, & Kuhnen, 2011; Kuhnen, Samanez-Larkin, & Knutson, 2013; Samanez-Larkin et al., 2010). Assessing the ecological validity of these laboratory-based tasks should greatly enhance our ability as scientists to make predictions about everyday behavior and in doing so help to identify individuals who may be especially vulnerable to making poor financial decisions (Denburg et al., 2007).

Combining the traditional focus on decisions in everyday life from economics and finance (Agarwal et al., 2009; Korniotis & Kumar, 2011) with detailed analysis of brain and behavior from psychology and neuroscience (Samanez-Larkin & Knutson, 2014) has led to the emergence of a truly multidisciplinary subfield of research on decision making across the life span. Although the recent progress is promising, this area is still very much in its infancy. The integrative “decision neuroscience approach” has tremendous potential for scientific and societal impact. If we are successful as scientists, the knowledge that we gain from research can be used on a broad scale to inform policy decisions and on an individual scale to help people of all ages make better decisions. One promising step in this direction will occur this month (May) when scientists and policymakers gather together for a meeting in Washington, DC, on Psychological Science and Behavioral Econom­ics in the Service of Public Policy. The meeting is co-sponsored by the White House Council of Economic Advisers, the White House Office of Science and Technology Policy, the National Institute on Aging at the National Institutes of Health, and the Association for Psychological Science.

We are currently at a unique moment in human history where demographic changes are and will continue to drastically alter the profile of decision makers in the global population. These changes highlight the challenges of (e.g., rising entitlement costs) but also opportunities for a graying population. To the extent that this emerging subfield can respond to the immediate demand for integrative and translational research, we have the potential to make major contributions to improving the well-being of humans across the life span.

Gregory R. Samanez-Larkin is currently a post-doctoral fellow at Vanderbilt University and will be an assistant professor of psychology at Yale University starting later this summer. He is a co-director of the Scientific Research Network on Decision Neuroscience and Aging. For training and funding opportunities, please visit www.srndna.org. His research on decision making across adulthood is currently supported by a Pathway to Independence Award (K99/R00) from the National Institute on Aging. He can be contacted at g.samanezlarkin@vanderbilt.edu.