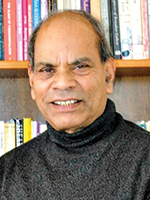 Das has spent his career studying intelligence outside of conventional measures such as IQ. Using neurophysiological and cognitive measures, he has defined intelligence as a complex concept that involves planning, attention, simultaneous comprehension, and sequencing. His Das–Naglieri cognitive assessment system, developed with Jack Naglieri of the University of Virginia, serves to assess intelligence while reducing cultural and educational biases.