Decades of investigating how children remember traumatic experiences could make a scientist bitter and cynical. But James McKeen Cattell Fellow Gail S. Goodman is optimistic her research will change children’s lives for the better. During her award address at the 24th APS Annual Convention in Chicago, the University of California, Davis researcher demonstrated how psychological scientists can positively influence the way child-abuse cases are investigated. 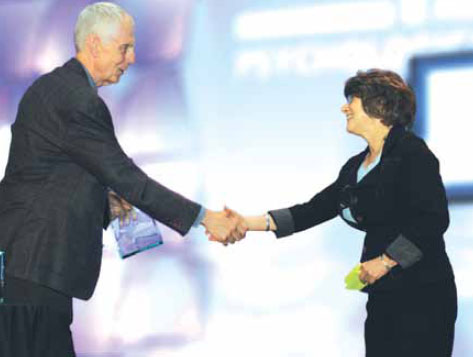 Gail S. Goodman (with APS Immediate Past President Douglas L. Medin) studies how well adults can distinguish between accurate and inaccurate reports made by children. Adults tend to over-believe when children deny.

Goodman began her talk with the case of a 2-year-old girl in Lewes, Delaware. On the way home from a visit to the pediatrician, the girl told her parents that the doctor had hurt her “down there.” The girl’s report ultimately led to the discovery of video tapes showing the doctor assaulting children in his basement.

“It’s not every day that a 2-year-old breaks a case like this,” said Goodman. “It poses a lot of issues about how we interview and believe a 2-year-old child in terms of their memory for traumatic events.”

One of those issues, said Goodman, is false reports. Some reports by child witnesses have led to wrongful convictions, so Goodman set out to determine just how well adults can distinguish between accurate and inaccurate reports made by children.

In one of her recent studies, children were interviewed about an event, such as getting in trouble for climbing on rocks, and their parents were asked whether the child told the truth or lied. Then adults who were unrelated to the children were asked to determine whether the child’s story was accurate or inaccurate. What Goodman and her colleagues found was that adults were pretty good at separating fact from fiction, except when children denied something that actually happened.

“Usually people over-believe children when they deny,” said Goodman. That fact is unfortunate, she said, because often children who are abused will deny that it happened, despite evidence that it did.

So what can adults do to uncover the truth? Ask the right questions, said Goodman. Another one of her studies suggests that leading questions, which tend to be discouraged in legal proceedings, are actually the best method for getting children to disclose discomforting information.

To demonstrate this effect, young girls were given full-body medical exams. Half the girls received a vaginal exam and the other half were tested for scoliosis. Then researchers asked the girls questions about the exam. When the girls were given a chance to describe the experience in their own words (free recall), very few of them disclosed the vaginal touch. But when the researcher pointed to a doll and asked the children, “Did the doctor touch you here?” more girls reported the touch. The leading question did produce false reports, but according to Goodman, the false-report rate was significantly smaller than the nondisclosure rate.

“You do get somewhat more error asking a leading question,” she said. “But if you didn’t ask it, you have a lot of kids — if it were a real case — who wouldn’t be protected.”

The issues Goodman raised in her talk were only a few of the many that are involved in child-abuse cases, and there are many questions that psychological scientists can answer.

“Our work is really listened to by the courts,” Goodman said, which is why she has a lot of hope for the future.