Observer > 2010 > July/August > Can I Take That Back? The Study of Impulsivity 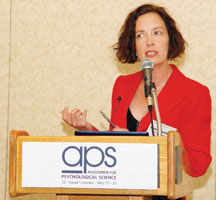 It doesn’t matter that you know better. It doesn’t matter that you’re aware of the consequences and will regret them later. At some point, your carefully disciplined sense of control will collapse — whether it means a scoop of ice cream for dessert turns into the entire pint, “just a couple of drinks” becomes a steady stream of liquor until the bar shuts down, or you yell at that really annoying guy on the subway.  Impulsivity is part of the human condition; nobody is a paragon of self-control. As with all parts of the human condition, there are psychologists studying the mechanisms behind impulsivity and how those mechanisms function — or  malfunction — at different times in different people. Several such leading researchers presented their findings in “When Enough is Too Much: Perspectives on Emotions and Behaviors That Go Too Far,” a cross-cutting theme program at the APS 22nd Annual Convention in Boston.

No matter what kind of controlled, rational adults we grow up to be (or not), generally speaking, we’re at our most reckless in adolescence.  APS Fellow Laurence Steinberg, Temple University, is well-known for his studies of adolescents (he was also the lead scientist on the APA amicus curiae brief in Roper v. Simmons, the Supreme Court case that abolished the death penalty for juveniles), and his research has uncovered some root causes for this youthful recklessness. Ultimately, teenage impulsiveness stems from an imbalance between two linked brain systems — the incentive processing system (IPS), which is active when we anticipate and process rewards and punishments, as well as in emotional/social processing, and the cognitive control system (CCS), which is associated with logical reasoning and impulse regulation. The IPS begins changing rapidly with the onset of puberty, causing teenagers to become more attentive to rewards, which results in increased sensation seeking. However, the CCS develops at a much slower rate, continuing well into the twenties, and the resulting improvements in impulse control and foresight do not keep up with the quicker and sharper growth of the IPS. The result is that, as Steinberg put it, “the accelerator is activated before a good braking system is in place,” with middle adolescence (ages 14–17) being an especially vulnerable period when this disparity between the two systems is largest. This effect manifests in many ways; in follow-up studies, Steinberg found that teens spend less time than young adults thinking before acting on difficult problems and that they show a stronger preference for immediate rewards in delay-discounting situations.

Finally, Steinberg touched on “The Peer Effect.” While alone in the lab or with two same-sex, same-age friends watching silently, teenagers and young adults performed a simulated driving task in which they were driving up to a yellow light. Teenagers with peers watching were far more likely to run the yellow light and risk a crash. This effect even appears in young adults (19–22 year olds), though it’s much more moderate.

Obviously, our impulse control systems aren’t perfect even after we’ve grown, but what if other conditions are in play? APS Fellow Sheri L. Johnson, University of California, Berkeley, and Timothy J. Trull, University of Missouri – Columbia, examined impulsivity in people with bipolar disorder and affective instability and impulsivity in borderline personality disorder (BPD), respectively. Johnson, a leading expert on bipolar disorder, explained how those with the disorder show elevated reward responsiveness compared with controls. In bipolar individuals, attaining one’s goals tends to trigger manic symptoms. Impulsivity goes hand in hand with reward responsivity (as does prefrontal cortex dysfunction), and those with the disorder also show an increased tendency to respond to positive mood states with changes in behavior — usually rash and/or sensation-seeking actions. Similarly, Trull’s work with BPD focused on affective instability (the experience of going from a baseline mood to an intense negative affective state), which often leads to problematic behaviors such as alcohol/substance abuse and interpersonal conflicts. Trull’s subjects utilized electronic diaries to record their mood shifts and actions throughout the day, and he found that their mood shifted much more drastically in response to perceived slights or rejections in comparison to individuals with major depressive disorder.

However, impulsivity isn’t just a hallmark of bipolar disorder and BPD. Christopher J. Patrick, Florida State University, presented the externalizing spectrum model (ESM) as an integrative framework for understanding various disorders involving weak impulse control. The ESM conceives of disorders of this type as arising from a heritable vulnerability that is expressed in differing ways (e.g., as impulsive aggression, alcohol dependence, or drug problems) depending on other environmental and genetic influences. Patrick described a new inventory, consisting of 23 scales representing five domains of behavior (including impulsiveness), for assessing behavior problems and related traits according to this model.  Patrick has used this new inventory in studies with prisoners to better understand antisocial, addictive behaviors in extreme externalizing individuals. Ultimately, he concluded that further research utilizing the model will advance our knowledge of common and specific elements of various impulse control disorders and contribute to a clearer account of the etiology of such disorders.

There is no rewind button in life and the psychological study of impulse control doesn’t propose to offer us one. But, as highlighted by APS Fellow Kenneth Sher of the University of Missouri as he led a roundtable discussion of the presenters, this close examination of the nature of impulsivity may lead to novel treatment and prevention options. Continuing research will give us perspective on why, every so often, we suddenly and rashly act against our own best interests (and common sense). ♦

Observer > 2010 > July/August > Can I Take That Back? The Study of Impulsivity

When it comes to self-control, young children are better able to resist temptation and wait for greater rewards if they take into consideration the opinions of others.