Psychological scientists often learn about each others’ work at conferences or in journals, but it’s not often that they actually get the chance to sit down face to face and pick each others’ brains. The Inside the Psychologist’s Studio session at the APS 23rd Annual Convention provided just such an opportunity. The session featured a wide-ranging conversation between Mahzarin Banaji and Rebecca Saxe and allowed attendees to learn the “story behind the story” of these two leading psychological scientists. 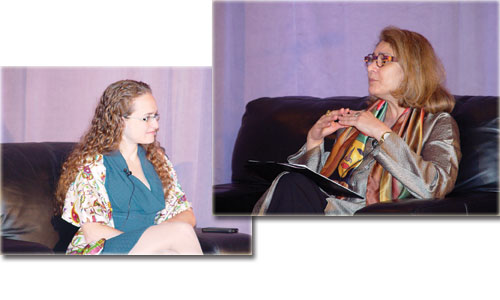 Then APS President Mahzarin Banaji (above) and Rebecca Saxe (left) shared their “story behind the story” during a standing-room-only special event during the APS 23rd Annual Convention. Watch the video.

Banaji, 2010-2011 APS President and a professor at Harvard University, is an established scholar in the field of implicit social cognition. Saxe, a professor at Massachusetts Institute of Technology, is a rising star in the field of social cognitive neuroscience. As their discussion proved, these two psychological scientists share a deep passion for uncovering truths about how we think about and relate to other people.

Saxe is specifically interested in understanding how we think about other people’s thoughts, an ability that is commonly referred to as Theory of Mind (ToM). ToM has been a topic of study for decades in many areas of psychology, including developmental, clinical, and comparative psychology. As Saxe observed, ToM is an important ability for living in a social world, because we need to be able to figure out what others are thinking if we want to predict what they will do in the future or evaluate what they have done in the past.

The fact that an abstract ability like ToM is so clearly visible in the brain fascinates Saxe. She is currently working on research that uses neuroimaging to understand the differences in how people who are involved in real-world disagreements — in this case, the Arab-Israeli conflict — think about each other’s thoughts. She hopes that this research may eventually serve as a basis to change negotiations and study how negotiations influence ToM processes.

The application of psychological science to these kinds of real-world problems is something Saxe has always admired in Banaji’s work, yet Banaji was cautious about the subject. While psychological science has enormous potential to inform decisions and policies, Banaji fears that there will “be a demand made of us to apply and say something about the world long before we are ready.” She stressed the importance of building a solid body of basic science research before trying to apply that research.

Banaji spoke about her own experience with bringing science to the real world in the form of the Implicit Association Test (IAT). The IAT was born out of the idea that a test that requires people to make rapid categorizations might shed light on people’s implicit attitudes without having to rely on their self-report or awareness. Banaji, her mentor Anthony Greenwald, and her then-student Brian Nosek all took the IAT and were shaken by the results. “We were just shocked by what we were observing in our own minds, what our minds were doing that we had no clue about,” Banaji commented. They eventually agreed that the IAT needed to be made available outside the academic journals, so they decided to establish the website for Project Implicit.

The website was immediately popular — 40,000 people took the IAT in the first month it was online — but the decision to go public was criticized by some in the field. Banaji acknowledged that “we had to give them good answers for why we thought this was a good way for us to proceed…by and large I think that we’ve persuaded people.”

Psychological research may sometimes yield findings that we’d rather not believe, but Banaji feels that psychological scientists must “tell it like it is.” Doing so enables scientists and policymakers to figure out how to address the aspects of human social interaction that are difficult or make us feel uncomfortable.

An Intergenerational Conversation Between Mahzarin R. Banaji and Rebecca

Like its quasi-namesake (that would be Inside the Actor’s Studio), the Inside the Psychologist’s Studio series traditionally has focused on more senior luminaries who look back at their accomplishments. In a departure from that format, we bring you a fascinating, wide-ranging forward-looking, intergenerational conversation that promises to leave you even more confident about the future of psychological science.

Both Banaji and Saxe consider a strong foundation in basic science research to be essential for advancing psychological science and psychological scientists. As students, they both had mentors who set very high standards and demanded intense effort in the lab. Now, as mentors themselves, Banaji and Saxe agreed that it is the “time on task,” as opposed to natural talent, that paves the way for success as a scientist. Saxe observed that the students who keep showing up are the ones who tend to become established lab members. She concluded that “the people who want it that badly are actually the people I want to work with.”

Remarking on the convergence that she has witnessed in psychological science in recent years, Banaji stated that she has “great faith that we’re heading right now in exactly the right direction.”