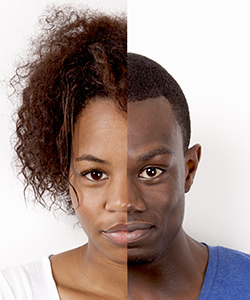 In the classic Star Wars film franchise, Princess Leia and Luke Skywalker kiss at least twice — before learning in a subsequent installment of George Lucas’s film franchise that they are in fact siblings.

In reality, a brother and sister meeting each other — even if unaware of their genetic relationship — might sense that mating is ill-advised.

Theoretically, humans, like many other organisms, possess some mechanisms for recognizing kin. Kin-recognition mechanisms can be simple rules like “treat any young in my nest as mine” or more complex methods like “avoid mating with individuals who smell similar to my parents.” Hundreds of papers have been published on kin recognition in species as diverse as social amoebae, peacocks, and Barbary macaques.

Kin-recognition cues are generally split into two classes: contextual and phenotypic. Contextual cues are environmental factors or events that affect the likelihood of encountering kin, such as spatial location, timing of association, and mating history. Phenotypic cues are physical similarities, such as odor and facial resemblance. Contextual and phenotypic cues can also be combined to optimally allocate behavior.

Brothers From Another Mother

One particularly illuminating example comes from studies of cross-fostered Belding’s ground squirrels. This method, in which part of a litter is reared from birth by an unrelated mother, allows researchers to test whether kin recognition occurs because of contextual cues, such as being raised together, or phenotypic cues, such as odor similarity. These cross-fostered pups treated their related and unrelated littermates identically, suggesting the use of contextual, but not phenotypic, cues.

Research on human kin recognition is in comparative infancy, partially because methods such as experimental cross-fostering are not possible in humans. However, methodological advances over the last decade, such as computer-graphic face manipulation and clever ways of implicitly measuring inbreeding avoidance, have contributed to the recent growth of research on human kin recognition.

A strong candidate cue for phenotypic kin recognition in humans is facial resemblance. Much of my own research has used experimental computer-graphic methods to investigate attitudes and behaviors toward self-resembling individuals. For example, individuals behave more trustingly in economic games when their pictured game partner has been subtly manipulated to resemble them.

Research dating back to the late 19th century shows that sexual attraction is dampened among people who were raised for certain periods of time in the same household. Early evidence for this idea came from fascinating studies of unusual child-rearing arrangements such as Israeli kibbutzim, where unrelated children are raised in a single household and show little sexual interest in one another as adults, or Taiwanese sim-pua marriages, in which girls are raised with their future husbands and experience decreased fertility and increased marital difficulties.

Researchers studied more traditional family arrangements by measuring people’s moral disgust in response to stories about consensual incest. These studies showed that individuals living with an other-sex sibling find the idea of incest particularly disgusting. This avoidance occurs even among step- and adopted siblings who are fully aware that they aren’t genetically related.

Through the use of this technique, scientists were able to recognize a new contextual kin-recognition cue: Maternal Perinatal Association (MPA). MPA refers to the close association that older siblings observe between their mothers and a newborn. Interestingly, individuals who experienced the MPA cue with a (younger) sibling show high levels of altruism and incest avoidance toward that sibling, no matter how long they lived together. Reanalysis of data from sim-pua marriages confirms this pattern.

Despite a decade of fruitful research on contextual and phenotypic cues used in human kin recognition, we know almost nothing about how these cues interact to influence behavior and attributions. A particularly interesting prediction is that contextual cues, such as frequency of interaction with kin, may affect how people perceive phenotypic cues, such as facial resemblance, and that such effects may appear only under specific circumstances.

Using the same “virtual siblings” method described above, I conducted an experiment to analyze how our real-life experiences with same-sex and other-sex siblings affect our
judgments about faces that resemble our own. In this study, I created both virtual sisters and virtual brothers for 156 women. Each woman was paired with another participant of a similar age, and each pair judged the trustworthiness and attractiveness of both individuals’ virtual siblings (since our participants were all heterosexual and we wanted a fully crossed design, we had participants judge “attractiveness” rather than specifically “sexual attractiveness” for both male and female faces). I measured kin bias by examining the extent to which women judged their own virtual siblings as more trustworthy or attractive than did their paired control participants.

But the women’s feelings of attraction toward virtual brothers varied. Participants who had no real-life brothers were relatively attracted to their virtual brothers. But those with real-life brothers, especially those with a younger brother or more than one brother, showed an aversion to self-resemblance in this sexual context. However, the number or type of brothers had no effect on the perception of trustworthiness of these same virtual brothers. The number of sisters did not modulate any effects of self-resemblance, nor did experience with brothers affect the perception of virtual sisters.

These results demonstrate previously unknown complexity in human kin recognition, whereby contextual cues can alter how phenotypic cues are processed in one, but not another, circumstance. In this case, experience with other-sex siblings affected how women responded to facial resemblance in a sexual context, but not in a prosocial context.

Where Do We Go From Here?

First, findings from existing research on attributions needs to be tied to behavior. For example, how do preferences translate into mate choice? My research suggests that people find potential mates who display facial cues of kinship unattractive. But are they actually less likely to choose those individuals as mates? My lab is currently trying to answer this latter question by examining the relationship between face preferences measured in the lab and actual partner choice. The data from our first, cross-sectional study shows a clear relationship between preference and choice: Both men and women who prefer relatively feminine faces in experimental tests also tend to have more feminine-looking partners than those who prefer more masculine faces. Our ongoing longitudinal study looking at singles’ face preferences and their subsequent partner choices will help determine whether this correlation arises because people succeed in choosing partners with physical features they prefer or because people grow to prefer the features of their partners.

Second, family relationships other than those with siblings and strangers may reveal an additional layer of relationship specificity in the use of kinship cues. This sort of research is rare because of the many challenges of research on family members, including the challenges of measuring prosocial and, especially, sexual behavior between relatives. However, one of the great joys of being a psychological scientist is the ability to integrate interdisciplinary methods and to develop novel techniques to overcome such challenges. I am hopeful that the next decade of research on human kin recognition will provide the sort of creative methods that can illuminate the full complexity of human kinship.

Lisa DeBruine is a reader in the Institute of Neuroscience and Psychology at the University of Glasgow, United Kingdom. In addition to her research on human kin recognition, she also studies factors that influence individual differences in mate preferences, such as regional differences in pathogen prevalence. Lisa is supported by an Economic and Social Research Council grant ES/I031022/1. She can be contacted at lisa.debruine@glasgow.ac.uk.