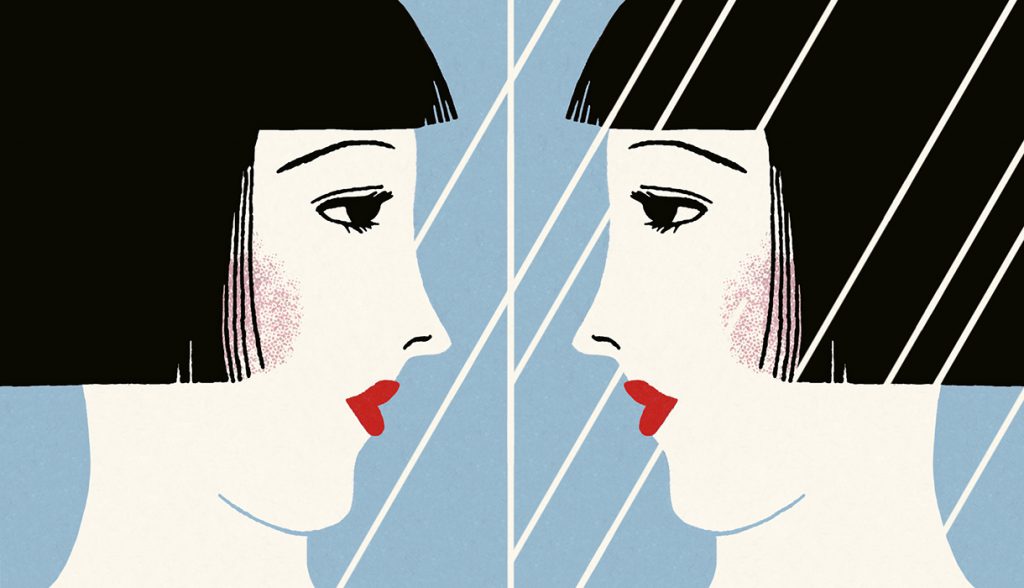 Given the limited capacity of our attention, we only process a small amount of the sights, sounds, and sensations that reach our senses at any given moment — what happens to the stimuli that reach our senses but don’t enter awareness? Research suggests that certain stimuli – specifically, your own face – can influence how you respond without you being aware of it. The findings are published in Psychological Science, a journal of the Association of Psychological Science.

“We’ve known for a long time that our brain is capable of subliminally processing and analyzing different types of simple stimuli. In our studies, we are trying to respond to the question of whether more complex stimuli can be efficiently processed subliminally and subsequently influence our behavior,” explains lead author Michał Wójcik, who conducted the research at the Nencki Institute of Experimental Biology in Warsaw and is a current PhD student at the University of Oxford.

A face is one such complex object. Despite the fact that most faces are pretty similar to one another, through the simultaneous analysis of many elements – eyes, lips, nose – we are usually able to recognize the faces of people we know with accuracy and efficiency.

“Both our intuition and previous studies indicate that our own face is to each of us a very strong and important stimulus. It awakens a variety of feelings and associations, and as a consequence effectively attracts our attention,” explains study coauthor Anna Nowicka, who specializes in researching the mechanics of how we process information about ourselves.

The researchers hypothesized that because one’s own face is such a strong stimulus the brain will recognize and react to it outside of conscious awareness.

On half of the trials, the faces were clearly visible and easy to recognize; on the other half of the trials, the faces were displayed for only 32 ms and were followed by a random pattern that masked the faces. This procedure is commonly used to present stimuli to participants outside of conscious awareness, and the researchers confirmed that it was effective in this study: Participants were able to identify faces that appeared briefly, but they were not able to identify the faces followed by a “mask” pattern.

“This type of technique allows us to test – in laboratory conditions – the influence of stimuli that reach our senses but are not strong enough to reach our consciousness,” says coauthor Michał Bola, who specializes in the study of unconscious processes.

The researchers used EEG to monitor participants’ brain activity as they completed the task.

“It has been known for many years that directing our attention to one side causes an asymmetry in brain activity between hemispheres. By analyzing these asymmetries, we were able to determine if in a given moment the participant’s attention was directed to the face presented on the left or the right,” explains Maria Nowicka, a coauthor and PhD student at the Nencki Institute.

The findings showed that participants automatically attended to their own faces when they appeared on screen, despite the fact that they were instructed not to do so. “This is a confirmation of earlier research conducted by our and other teams, showing that we preferentially process stimuli belonging to the concept of ‘I,’ for example our own name or face,” Maria Nowicka says.

Importantly, the findings also showed that participants automatically attended to their own faces even when they weren’t aware of them.

“Despite our participants not knowing that at a given moment their own face was being presented, their brain focused attention on that side of the field of view. This means that the brain must have – without the participation of consciousness – identified both of the faces and reacted to the face known as its own. It thus seems that consciousness is not necessary for recognition of faces after all,” adds Michał Wójcik.

Previous research has shown this phenomenon with simple stimuli – such as a red object embedded among many green objects – but this study shows that it occurs with more complex stimuli, as well.

“In our study, we showed that much more complex objects – like faces, which consist of many elements and require more detailed analysis to recognize – can unconsciously attract attention,” says Bola. “Our experiment is part of a research trend indicating that the capacities of our ‘unconscious mind’ are much larger than we previously thought.”

The researchers note that additional research will be necessary to determine whether it is specifically the identity of one’s own face or the extreme familiarity of one’s face that attracts attention outside of awareness. They also plan to investigate whether this preferential attention outside awareness is specific to faces or also occurs with other complex objects.

The project was funded by the National Science Centre Poland.

All data have been made publicly available via the Open Science Framework. This article has received the badge for Open Data.