News > Latest Research News > The Sound of Status: People Know High-Power Voices When They Hear Them

Being in a position of power can fundamentally change the way you speak, altering basic acoustic properties of the voice, and other people are able to pick up on these vocal cues to know who is really in charge, according to new research published in Psychological Science, a journal of the Association for Psychological Science.

We tend to focus on our words when we want to come across as powerful to others, but these findings suggest that basic acoustic cues also play an important role: 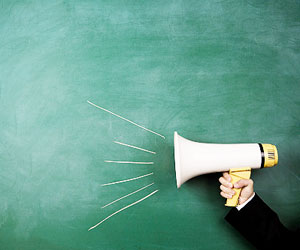 “Our findings suggest that whether it’s parents attempting to assert authority over unruly children, haggling between a car salesman and customer, or negotiations between heads of states, the sound of the voices involved may profoundly determine the outcome of those interactions,” says psychological scientist and lead researcher Sei Jin Ko of San Diego State University.

The researchers had long been interested in non-language-related properties of speech, but it was former UK prime minister Margaret Thatcher that inspired them to investigate the relationship between acoustic cues and power.

“It was quite well known that Thatcher had gone through extensive voice coaching to exude a more authoritative, powerful persona,” explains Ko. “We wanted to explore how something so fundamental as power might elicit changes in the way a voice sounds, and how these situational vocal changes impact the way listeners perceive and behave toward the speakers.”

Ko, along with Melody Sadler of San Diego State and Adam Galinsky of Columbia Business School, designed two studies to find out.

In the first experiment, they recorded 161 college students reading a passage aloud; this first recording captured baseline acoustics. The participants were then randomly assigned them to play a specific role in an ensuing negotiation exercise.

The students then read a second passage aloud, as if they were leading off negotiations with their imaginary adversary, and their voices were recorded. Everyone read the same opening, allowing the researchers to examine acoustics while holding the speech content constant across all participants.

And the students’ vocal cues didn’t go unnoticed. A second experiment with a separate group of college students revealed that listeners, who had no knowledge of the first experiment, were able to pick up on these power-related vocal cues to determine who did and did not have power: Listeners ranked speakers who had been assigned to the high-rank group as more likely to engage in high-power behaviors, and they were able to categorize whether a speaker had high or low rank with considerable accuracy.

In line with the vocal changes observed in the first experiments, listeners tended to associate higher pitch and voices that varied in loudness with high-power behaviors. They also associated louder voices with higher power.

“These findings suggest that listeners are quite perceptive to these subtle variations in vocal cues and they use these cues to decide who is in charge,” says Galinsky.

This research was partially supported by a grant to the first author from the Dispute Resolution Research Center at Northwestern University.

All data and materials have been made publicly available via Open Science Framework and can be accessed at https://osf.io/cw6y8/?view_only=24a186cebd52441ea0170ed63caf70ab and https://osf.io/5hzv9/?view_only=94aa2b0312c3463493ca6f61c5fc3811, respectively. The complete Open Practices Disclosure for this article can be found at http://pss.sagepub.com/content/by/supplemental-data.

News > Latest Research News > The Sound of Status: People Know High-Power Voices When They Hear Them