“Our results indicate that perceptions of beauty in a romantic partner might change with time, as individuals get to know one another better before they start dating,” says lead researcher Lucy Hunt of the University of Texas at Austin. “Having more time to get acquainted may allow other factors, such as another person’s compatibility as a relationship partner, to make that person appealing in ways that outshine more easily observable characteristics such as physical attractiveness. Or perhaps another person might actually become more attractive in the eyes of the beholder by virtue of these other factors.” 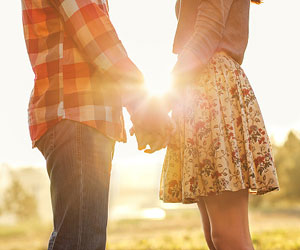 Hunt and colleagues Paul Eastwick (UT-Austin) and Eli Finkel (Northwestern University) were interested in understanding why individuals tend to be paired with mates who have similar physical, behavioral, and psychological characteristics — a well-documented phenomenon psychological scientists refer to as “assortative mating.”

One explanation for this pattern in pairing comes from a competition-based perspective: an individual’s success in the mating “market” is limited by his or her own desirability. People who are physically attractive tend to be seen as very desirable and are, therefore, better able to win over highly-desirable partners themselves.

Hunt and colleagues hypothesized that the length of acquaintance between partners may shift the dynamics of this sexual competition. Their prior research showed that, as people get to know each other more intimately and across various contexts, their opinions about the other person’s desirability change, making objective physical attractiveness less relevant in determining whether the two individuals become a couple.

“Having the time to interact with others in diverse settings affords more opportunities to form unique impressions that go beyond one’s initial snap judgments,” says Hunt. “Given that people initiate romantic relationships both with strangers and acquaintances in real life, we were interested in how time might affect how similarly attractive couple members are to one another.”

Hunt, Eastwick, and Finkel hypothesized that partners who had known each other a short time before dating were likely to be similarly attractive, while partners who were well-acquainted before their romantic involvement might show a greater mismatch in physical attractiveness.

The researchers looked at data collected from 167 couples — 67 dating and 100 married — who were participating in a longitudinal study of romantic relationships. The couples had been together for as few as 3 months and as long as 53 years, with an average relationship length of 8 years and 8 months.

As part of the study, the couples were videotaped talking about how they had changed over the course of the relationship. Using these videos, independent, trained coders used rating scales to indicate the physical attractiveness of each partner; the ratings were strongly correlated among the coders, suggesting a high level of agreement on the physical desirability of each partner.

The results revealed that the longer the romantic partners had known each other before dating, the less likely they were to be matched on attractiveness, just as the researchers hypothesized. For example, the pairing of an unattractive woman with an attractive man was more likely to emerge if the partners had known one another for many months prior to dating.

Partners who began dating within a month of first meeting each other showed a strong correlation for physical attractiveness. But the correlation was much lower for partners who had known each other for a long time before dating. A similar pattern emerged when the researchers looked at whether pairs were friends before they started dating — friends-first couples were less likely to be matched on attractiveness than couples who were strangers before dating.

Interestingly, the level of match on attractiveness was not associated with relationship satisfaction for either men or women in the study. That is, both friends-first and stranger-first relationships seem approximately equally happy years later.

Hunt and colleagues note that the research will need to be replicated across more diverse samples and contexts, but these findings suggest that length of acquaintance can influence whether we perceive someone as being a desirable partner:

“There may be more to the old saying than was previously thought: Maybe it’s the case that beauty is partially in the eye of the beholder, especially as time passes,” Hunt concludes.

All relevant materials have been made publicly available via Open Science Framework and can be accessed at https://osf.io/zmh8j. The complete Open Practices Disclosure for this article can be found at http://pss.sagepub.com/content/by/supplemental-data. This article has received the badge for Open Materials. More information about the Open Practices badges can be found at https://osf.io/tvyxz/wiki/view/ and http://pss.sagepub.com/content/25/1/3.full.