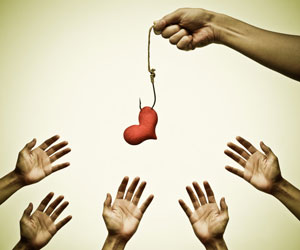 Encountering information suggesting that it may be tough to find a romantic partner shifts people’s decision making toward riskier options, according to new findings from a series of studies published in Psychological Science, a journal of the Association for Psychological Science.

“Environmental cues indicating that one will have a relatively difficult time finding a mate can drive people to concentrate their investment choices into a few high-risk, high-return options,” says psychological scientist Joshua Ackerman of the University of Michigan, lead author on the research. “This is true even when the decisions people are making are not explicitly relevant to romantic outcomes.”

“This is exactly opposite from the pattern of investing we would predict if we assumed people were using an economically ‘rational’ decision strategy,” Ackerman explains. “From an evolutionary perspective, if the options are to do whatever it takes to find a romantic partner or risk not finding one, the more rational choice may be to do whatever it takes.”

Research has shown that people who face uncertain outcomes often diversify their choices as a strategy for mitigating risk—if one investment or option falls through, they still have other investments or options to fall back on. Ackerman and colleagues speculated that diversification may not be the optimal strategy if romantic success depends on passing above a certain threshold when it comes to resources, status, or attractiveness. Choosing high-risk, high-reward strategies, even in domains unrelated to romance, could help an individual surpass the threshold and stand out from his or her competitors.

To test their hypothesis, the researchers designed a series of studies in which they manipulated the perceived odds of romantic success by presenting participants with information about the ratio of women to men in their area. An unfavorable sex ratio—a majority of men if you’re a heterosexual man, for example—indicates that it will be harder for most people to find and attract a potential partner.

In one study, 93 heterosexual participants looked at three photos displays containing images of men and women aged 18 to 35 who supposedly lived in the local community. Participants, who thought they were participating in a memory study, looked at the photos and were then asked to recall how many men and women appeared in each display. In this way, the researchers were able to ensure that participants were aware of the sex ratio depicted in the displays.

Then, as part of an ostensibly unrelated task, participants were asked to imagine they were buying scratch-off lottery tickets and were told to choose which option they would purchase: one $10 ticket for a $10,000 prize or ten $1 tickets for $1000 each.

In a second online study, 105 participants read a newspaper article discussing demographic trends in the U.S. They then evaluated stock packages with equivalent values (e.g., 100 shares in 8 companies, 200 shares in 4 companies, etc.) and chose which package they would invest in.

Again, the data showed that both male and female participants who read about unfavorable sex ratios opted for riskier investments, choosing more shares in fewer companies, than those who read about favorable ratios.

A similar pattern emerged when the researchers had participants engage in other types of investing decision making, including allocating funds in a hypothetical retirement account and distributing resources among companies for vaccine research and development. Importantly, the effect did not depend on participants’ own investing experience and relationship status.

The fact that sex ratio had an impact on decisions that were not directly linked with mating success suggests that sexual competition elicits a general mindset geared toward achieving the largest possible reward, regardless of the risk involved.

As such, the researchers argue, these findings could have implications for decision making in domains as diverse as retirement planning, gambling, and even making consumer purchases.

“This research has the potential to affect anyone making decisions with uncertain outcomes, including both single and romantically committed men and women,” says Ackerman.

Co-authors on the research include Jon K. Maner of Northwestern University and Stephanie M. Carpenter of the University of Wisconsin-Madison.

All materials have been made publicly available via the Open Science Framework and can be accessed at https://osf.io/xgwhk. The complete Open Practices Disclosure for this article can be found at http://pss.sagepub.com/content/by/supplemental-data. This article has received the badge for Open Materials. More information about the Open Practices badges can be found at https://osf.io/tvyxz/wiki/1.%20View%20the%20Badges/ and http://pss.sagepub.com/content/25/1/3.full.