News > Minds on the Road > Why We Pass Some Cars, Follow Others 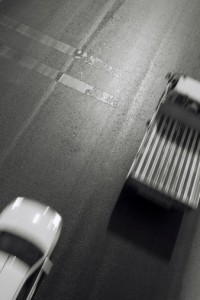 Cars are the ultimate status symbol. They also generate some remarkable forms of discrimination. A Maserati gets more respect than a Volkswagen Bug.

Classic psychological studies have demonstrated that a drivers extend more patience and courtesy to motorists driving expensive cars than those in older, cheaper vehicles. In their seminal 1968 experiment, for example, Anthony N. Doob and Alan E. Gross found that drivers waited longer to honk at a high-priced car than when blocked by an old model.

This builds on a wide body of research showing that people act more aggressively toward others of low social status.

French behavioral researchers recently decided to extend this line of research by examining how drivers reacts to the speed of various cars traveling in front of them. In an experiment conducted on a rural road in the south of Brittany, they showed that drivers behind a high-status car traveling below the speed limit were more likely to conform to that vehicle’s speed than they were to match a low-status car’s speed.

Led by social psychologist Nicolas Guéguen of Université de Bretagne-Sud, they recruited two men as drivers, and two women to serve as passengers (and observers of other motorists’ activity). Over the two-day experiment, each of the men alternated between driving a S80 Volvo Summum model with an average price of $58,500, and a 15-year-old Renault Super 5 Campus that averages a mere $1,100 in price. The stretch of road they traveled had a posted speed limit of 70 km/h, but most drivers exceeded that by 10 km/h to 20 km/h. The two drivers were instructed to scrupulously travel at or below the speed limit.

As reported in the journal Transportation Research Part F, high-status car seemed to inhibit other drivers from passing, even when the pricey vehicle was traveling below the speed limit.

The researchers speculate that this result reflects pure conformity—a tendency to respect the behavior of a high-status vs. a low-status person.  They theorize that motorists would have continued following the speed of the Volvo in the experiment even if it exceeded the speed limit—which is a more realistic condition. They point to other studies showing that people who drive high-performance cars drive more recklessly and aggressively than lower-performing cars. It’s reasonable to expect that those drivers encourage similar behavior in others, indicating that road safety campaigns should be focused on people with fancy wheels.

News > Minds on the Road > Why We Pass Some Cars, Follow Others