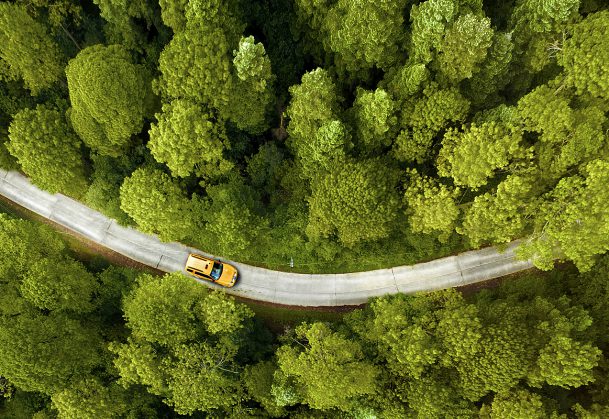 Road transportation accounts for around 20% of greenhouse gas emissions in the European Union, according to the European Commission. One strategy to help reduce emissions is to get bus drivers to adopt new driving behaviors to use up less fuel. But can training people in the lab actually translate to greener driving behavior on the road?

A promising new study shows that a simple behavioral intervention for bus drivers may go a long way towards reducing greenhouse gas emissions.

Working with Pirita Niemi of the Työtehoseura organization in Finland, psychological scientists Mark J.M. Sullman and Lisa Dorn of Cranfield University in the UK designed a field experiment to see if eco-driving in the lab could lead to lasting behavior changes on the road.

A group of professional bus drivers was trained in the lab on how to use more fuel-efficient driving strategies. Six months later, the researchers checked on the bus drivers’ fuel efficiency on the job.

“Bus drivers who were trained in eco-driving techniques improved their average fuel economy on the simulator immediately after the training, while those in the control group did not,” the researchers explain. “More importantly these techniques were also implemented in the workplace, with an 11.6% improvement in fuel economy immediately following the training and this was further increased to 16.9% after six months.”

Study participants comprised professional bus drivers recruited from different private transportation companies based in Helsinki. One group of 18 bus drivers served as a control group; in the lab they completed an all-day training session on first-aid. The 29 bus drivers in the treatment group received an all-day training on fuel efficiency techniques. The drivers in this group got to try out their eco-driving skills in a life-like bus driving simulator both before and after their training.

The simulator routes were designed based upon real routes and conditions within the Helsinki area. A number of performance measures were taken during the drive, such as fuel consumption, distance driven, and time taken to complete the drive. As part of their training, the drivers in the treatment group were taught five practical “golden rules” of fuel efficiency, ranging from maintaining a steady speed to regularly checking tire pressure. Each individual then received individualized coaching on putting these principles into practice while driving with an instructor in the bus simulator.

“This study shows that simulator-based training in eco-driving techniques has the potential to significantly reduce fuel consumption and greenhouse gas emissions in the road transport sector,” the researchers conclude.

“This study concentrated on training the drivers in how to drive in an economical fashion, but no attempt was made to change the driver’s attitudes towards eco-driving or their intentions to engage in eco-driving,” the researchers explain. It’s possible, the researchers argue, that including additional behavioral interventions—like describing positive social norms—in future trainings could boost fuel efficiency even more.

“If this level of improvement could be made throughout the EU road transport sector it would greatly contribute to the EU meeting its environmental goals,” the researchers conclude. “Furthermore, this research also demonstrated that training drivers in eco-driving has the potential to greatly reduce fuel-related costs for transport companies.”

I’m trying to come up with a good way to ensure that my son is a safe driver. It makes sense that I would want to get him to a driving school! I hope that they go green, since that would mean less pollution from training.