Leonard B. Robinson, known as the “Route 29 Batman,” was killed this week after his black “Batmobile” broke down on the highway. At the time of the accident, Robinson was dressed in the black Batman costume he often wore to cheer up sick children in the hospital.

After his car experienced an engine problem, Robinson pulled over to the side of a dark highway where he got out of the car to check the engine in the dark. Robinson was killed when a passing car failed to spot him on the side of the road. 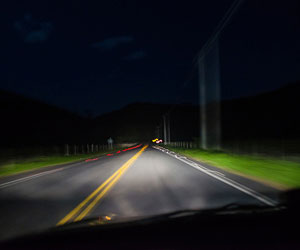 Recent research has shown that pedestrians tend to underestimate how visible they are to drivers at night; likewise, motorists overestimate their own accuracy at spotting pedestrians in the dark.

Researchers have repeatedly demonstrated that drivers’ ability to see and respond to pedestrians at night takes a nosedive when pedestrians wear clothing that blends in with the background. One of the current explanations for Robinson’s tragic death is that he was particularly difficult to see in his black costume, standing next to a black car on the side of a dark road.

Psychological scientist Stephanie Whetsel Borzendowski of Clemson University has studied the misconceptions that both drivers and pedestrians hold when it comes to nighttime visibility.

“Compounding drivers’ overconfidence at night is the possibility that pedestrians fail to appreciate the difficulty that drivers have in seeing them,” Borzendowski and colleagues write. “Results of several studies indicate that pedestrians typically overestimate their own conspicuity to drivers at night.”

First, the researchers had a group of college students estimate the distance at which they would first recognize a pedestrian at night in the presence of headlight glare. They then measured the distance at which participants actually recognized a pedestrian walking on a road at night. Pedestrians either wore their normal street clothing, a black shirt and pants, or a white shirt and pants.

The results confirmed that participants underestimated the degree to which the color of the pedestrians’ clothing impacted their visibility.

In another set of experiments, participants were instructed to walk away from a car with the high beams on until they were confident the driver would no longer be able to recognize them as a pedestrian. Depending on the condition, the vehicle’s high beams were either set at high, medium, or low illumination and the pedestrian wore either street clothes or a reflective safety vest.

Again, participants significantly overestimated how conspicuous they were to drivers, particularly when they were wearing a reflective vest. With a safety vest, participants estimated they’d be visible at about 140 meters. In reality, drivers couldn’t see someone in a safety best until they were about 40 meters away.

“The fact that pedestrians do not appear to understand their own visibility at night may lead them to engage in dangerous behaviors (e.g., crossing the street outside of a crosswalk or jogging on the shoulder of a road) that put them at risk for collisions with vehicles,” the researchers conclude.