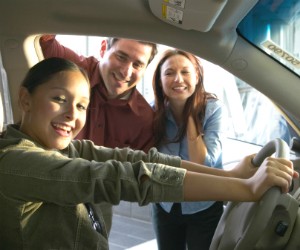 From dangerous driving to drug use, numerous studies have shown that teens are far more likely to engage in a slew of risky behaviors when they’re with peers than when they’re alone.

For example, studies conducted by Laurence Steinberg of Temple University demonstrated that teens—who are already among the most risk-prone drivers to begin with—are even more likely to take risks behind the wheel when peers are present.

However, new research from a team of psychological scientists from the University of Illinois demonstrates that parents, as well as peers, can also significantly influence a teen driver’s behavior.

“[Steinberg] found that peers significantly increase risk-taking among teens,” says lead author Eva Telzer. “I wanted to know whether we could reduce risk-taking by bringing a parent into the car.”

It might seem obvious that a teen wouldn’t want to show off their daredevil driving skills in front of mom. However, Telzer and colleagues not only showed that teens are less risk-prone with mom watching, but they identified specific neural mechanisms involved when teen brains balance risk and reward.

A brain area associated with reward known as the ventral striatum is more sensitive to rewards in adolescence than during any other developmental period. When teens encounter a risky situation, say speeding through a yellow light at an intersection, the ventral striatum shows heightened activation.

Telzer’s team hypothesized that risky driving when teens were alone would elicit heightened activation in the ventral striatum. But with mom watching would risky driving be just as thrilling?

The researchers expected that when mothers were present areas of the brain related to reward would show less activation, while areas involved in self-control, such as the prefrontal cortex, would show heightened activity.

For the study, 25 14-year-olds and their mothers came to the lab to complete a series of simulated driving tasks in an fMRI scanner.

Adolescents were asked to complete a driving course for a cash prize; the faster they completed the course, the more money they could win. They then completed two rounds of the course during two functional brain scans—one round of the game while their mother was watching and one round while alone.

Throughout the course, they encountered a number of stoplights and had to decide whether to stop or go by pressing one of two buttons. A decision to go through the intersection was the fastest option, but participants risked the possibility of crashing, which added a 6-second delay to their total time. If they chose to stop at the intersection there was no risk of a crash, but there would be an automatic 3-second delay. At the end of each round, participants were presented with their overall time and number of crashes.

During the mother condition, the participant’s mother simply told him or her that she would be present and watching. The mothers did not provide any feedback, encouragement, or directions during the experiment.

The results showed that when the teens were alone they engaged in more risky decisions. And, just as the researchers expected, fMRI data showed heightened activation in the ventral striatum when the teens ignored a yellow stoplight and drove through the intersection anyway.

However, the teens showed strikingly different results when mom was watching.

“Together, our findings suggest that mothers reduce the rewarding and salient nature of engaging in risk taking, perhaps taking the fun out of being risky,” Telzer writes in the journal Social Cognitive and Affective Neuroscience. “Our findings suggest that parental influence does not have to be explicit. The mere presence of a parent in the room or car may help adolescents to slow down, think twice and make more deliberative and safe decisions.”