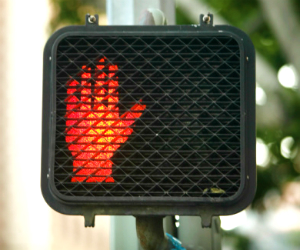 We’ve all seen it before — distracted pedestrians who dart across the street without thinking and drivers who speed through intersections and stoplights as if they owned the road.

Depending on how you typically get around, it may be tempting to generalize about the other camp and conclude that either pedestrians or drivers are more prone to unwise behavior. But new research shows that unsafe road behavior is more about the individual person than it is about the particular mode of transport: Some people are just more likely to take risks on the road, whether they’re behind the wheel or not.

Psychological scientists Orit Taubman – Ben-Ari and Eliyahu Shay of Bar-Ilan University in Israel found that people who had a driver’s license were actually more likely to engage in dangerous road-crossing behavior, like ignoring red lights, than people without a license. But the researchers found that those who engage in risky driving also tend to take unnecessary risks as pedestrians.

In order to study a large sample of people without driver’s licenses, the researchers recruited 518 Ultra-Orthodox Jews (292 men and 226 women) from across Israel. Having a driver’s license is not the norm for this community, and a relatively large proportion of the adult Ultra-Orthodox population does not drive at all.

All participants – drivers and non-drivers – completed two self-report scales measuring pedestrian behavior, such as paying attention while crossing the road and likelihood of crossing the road against a red light. Those participants with a driver’s license completed an additional set of four self-report questionnaires assessing their driving, including driving style (reckless, aggressive, anxious, patient) and rates of risky and reckless behavior, like speeding or running red lights.

While it may seem logical that drivers would be more conscientious of the dangers, or at least the annoyance, of dealing with jaywalkers, the study found that people with driver’s licenses were actually the ones who were more likely to engage in risky behaviors as pedestrians.

“The results indicate that individuals who have a driver’s license are more likely to take risks as pedestrians (crossing the road at a red light) than those who do not drive,” Taubman-Ben-Ari and Shay write in the journal Transportation Research Part F: Traffic Psychology and Behaviour.

The study also found that the riskier an individual’s behavior behind the wheel, the more likely that person would be to engage in risky behavior as pedestrians.

Previous research has shown that when risk is rated to be high (or low) in one domain, it is more likely to be rated as high (or low) also in other contexts and domains. Thus, the researchers hypothesize that “it is possible that the tendency to cross the road dangerously and the tendency to drive dangerously reflect a more general propensity to take risks, at least on the road.”

However, because getting a driver’s license is not typical among Ultra-Orthodox, it’s possible that self-selection may be at work – those who choose to get a license in the first place may be more prone to risky behavior.

The researchers also caution that because the study relied on self-report measures, future research should focus on real-world behaviors in both drivers and pedestrians.

Currently, most road safety campaigns address drivers and pedestrians separately. But these findings indicate that particular individuals may have a general tendency for risk taking – behind the wheel or not. Road safety campaigns may ultimately be more effective at modifying unsafe behavior on the road if they address risky behavior in general, rather than specifically targeting drivers or pedestrians.

There is an alternative explanation.
Licence holders may feel they understand the roads better.
For example, if they see a red pedestrian light and no cars, they may feel more confident about breaking road rules they feel they understand. Whereas someone who does not drive may feel intimidated by the road and its rules.