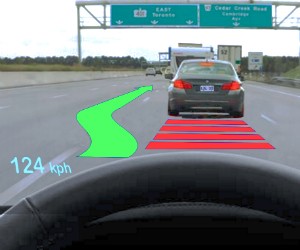 Several companies are already investing in new technology aimed at deterring distracted driving by projecting graphics from a cellphone—text messages, weather, collision warnings—directly onto a driver’s field of view on the windshield.

Proponents of this technology argue that it will increase road safety by providing drivers with useful information without having to take their eyes off the road. Rather than glancing down at a cellphone to read a text or check the map, directions and messages will appear directly in the driver’s line of sight.

But a new study from psychological scientists at the University of Toronto demonstrates that these futuristic heads-up displays may have the exact opposite outcome—the driver’s attention to the road is likely to become dangerously compromised.

Study authors Yuechuan Sun, Sijing Wu, and Ian Spence hypothesized that much like talking on a cellphone in the car makes it virtually impossible for drivers to fully focus on the road, attending to two different streams of visual information at the same time would also be distracting.

“Such partitioning of attention almost always exacts a penalty; none of the tasks is performed as well as when each is done on its own,” the researchers write in the journal PLoS ONE.

Studies have consistently shown that when we’re distracted we may fail to perceive things that are right before our eyes in a phenomena known as “inattention blindness.” In a now-classic experiment, for example, people counting basketball passes in a video often failed to notice a man in a gorilla suit even though he walked right through the game. The researchers expected that heads-up displays may act as the distracting “invisible gorilla,” causing drivers to miss important events taking place right in front of them.

Sun, Wu, and Spence designed two tests to measure people’s ability to attend to two streams of visual information at once. A group of 45 college students completed a series of computer-based trials in which they were asked to report how many black dots (between one and nine) were displayed on a computer screen. In some of the trials, a black outline of a square also briefly appeared on the screen.

The results suggest that when our attention is fully occupied by one task, it becomes more difficult to fully attend to a secondary task. When the square appeared along with a small number of spots (1–4 spots), it was missed about one in 15 times, on average. As the number of spots increased, participants’ ability to spot the square decreased; with 5-8 spots, participants missed the square entirely in 1 out of 10 instances, on average.

Nonetheless, even when the spot-counting task was at its most difficult, participants were still fairly accurate at detecting the square. However, in a real-life situation – such as driving a car – it is not enough to simply see something unexpected, drivers also have to identify what they’ve seen and respond quickly.

In a second study, the researchers asked a separate group of 45 participants to identify the appearance of a random distinctive shape – a triangle, square or diamond – among the spots. Again, the spots and shape were displayed together, and the shape appeared at random.

Instead of the question, “Did you see anything else?” participants were asked whether they had seen a triangle, square, diamond, or none of these shapes.

Again, the two visual tasks interfered with each other and impaired both reaction speed and accuracy.  In trials with larger numbers of spots, the shape was often misidentified or missed altogether.

Slowed reaction times and inattention blindness are proven threats to road safety. To make matters worse, competition for a driver’s attention is most likely to occur when the driving environment is treacherous or otherwise demanding, as in heavy traffic or bad weather.

“This innovation has the potential to make operating vehicles safer but our data suggest that there are significant concerns regarding driver distraction,” the researchers conclude.