News > Minds on the Road > Fighting Crime, One License Plate at a Time? 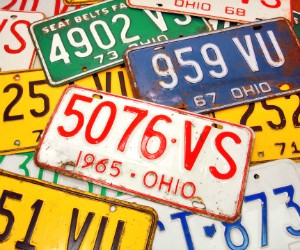 You’re driving down the street when you witness a hit-and-run incident between two other cars. The offending driver speeds off before you have a chance to jot down their license plate number. You’ve only had a few seconds to memorize the plate but you know that the more you can remember, the more likely police are to nab the hit-and-run driver.

This is no small feat. Vanity plates aside, the seeming arbitrariness of the letters and numbers that grace most license plates makes them tricky to memorize on the spot.

Currently, the state of Massachusetts is considering calling for all state license plates to include a commonly recognizable symbol, such as a triangle or circle, in addition to the standard letters and numbers. The assumption behind the bill is that including symbols, in addition to numbers and letters, will make plates easier to remember in case of a crime.

But does the science back up the claim? Before spending millions of dollars on a new standard for license plates, a Massachusetts task force heard from a team of memory experts.

“Given that a partially remembered plate is much more likely to be useful than an impoverished description of a suspect, surprisingly little research has been published in the psychological literature on the memorability of license plates,” the researchers write in the journal Psychology, Public Policy, and Law.

The team hypothesized that including a symbol, like a triangle, in the plate might help create natural groups. Chunking, or the grouping of items into meaningful units, is a well-known strategy for improving memorization — a 10-digit phone number, for example, is divided into three different chunks.

Including a symbol might help people “chunk” the license plate’s characters, making a plate with a symbol easier to recall.

In the first experiment, 619 subjects between 18 and 74 years old viewed a short video online. Participants were prompted to remember the color of the car and license plate number.

After a short waiting period, participants were asked to recall the color of the car and the license plate number.

As expected, subjects remembered the plates better when they viewed the plates longer. However, performance in the symbol and non-symbol license conditions was essentially identical; including symbols neither harmed nor improved memory performance.

A follow-up experiment including 1,048 people showed similar results. Regardless of the symbols used, on average people were only able to correctly recall 3-4 license plate elements.

Considering that participants were specifically instructed to memorize the plates, the results strongly suggest that symbols are encoded in memory in a similar way to letters or numbers.

“Our data are quite conclusive that there is no overall memory benefit associated with the inclusion of a symbol, nor is memory for the symbol itself better (or worse) than memory for a letter or number,” the researchers conclude.

The research team did find evidence that greater randomization of license plate numbers might be one way to assist law enforcement identify a suspect. By generating license plate number at random, rather than sequentially, the addition of a symbol could improve the ability of police to identify a vehicle involved in a crime by reducing the number of similar license plates to consider.

News > Minds on the Road > Fighting Crime, One License Plate at a Time?

Recollections of our past whereabouts are often imperfect.