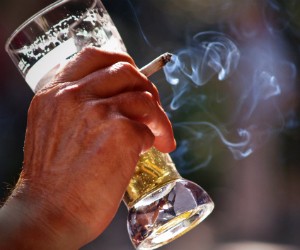 Cannabis and alcohol are the drugs most commonly detected in the systems of drivers involved in crashes, according to the National Highway Traffic Safety Administration. Decades of research has looked at the impairing effects of drinking alcohol and driving, but little research has investigated how these two drugs affect behavior behind the wheel when combined.

A team of Australian researchers, led by psychological scientist Luke Downey of Swinburne University of Technology, carried out a double-blind, placebo-controlled experiment to find out how drivers react when these two drugs are combined.

The study carefully compared the potential effects of both high and low doses of alcohol and THC—the psychoactive chemical in marijuana. The findings showed that consuming alcohol and marijuana at the same time, even in small doses, hampers driving skills more than consuming either one alone does.

Two groups of 40 participants were recruited: One group was made up of regular cannabis users, while the other group were only occasional users. All participants had used cannabis before. These two groups were further divided into sub-groups that received either high, medium, or placebo doses of alcohol and cannabis.

Participants were given a drink of vodka and orange juice. After 20 minutes, a nurse administered a blood alcohol concentration test to confirm the target high (0.06% BAC), low (0.04% BAC), and placebo levels (0% BAC) for the experiment. Once the target BAC was confirmed, the participant smoked a cannabis cigarette which contained either 0% THC, 1.78% THC, or 3.42% THC.

Participants then drove through a series of different road environments in a driving simulator, including city and freeway driving in nighttime and daylight conditions. To determine the level of driving impairment, the researchers tracked 19 common driving errors, such as collisions, straddling the barrier line, speeding, and tailgating.

Confirming previous research findings, both THC and alcohol independently impaired people’s driving ability. But, mixing alcohol and THC—whether in high or low doses—led to a dramatic increase in road errors.

The researchers were surprised to find that regular cannabis users actually made more errors compared to the occasional users, with and without alcohol.

“The consumption of alcohol – which has previously been associated with over-confident driving behavior, decreased inhibitions and greater risk taking – may have led regular users to underestimate the effects of consuming THC with alcohol,” the researchers write.

Blood tests confirmed that drinking alcohol before consuming cannabis led to higher levels of THC in the bloodstream.

“Consistent with past research, the level of THC detected in blood is higher when THC is consumed with alcohol, than when cannabis is consumed alone,” the researchers explain.

A recent driving simulator study from the National Institute on Drug Abuse (NIDA) produced similar results: “Drinking alcohol and smoking marijuana had an additive effect, so that drivers using both substances weaved within lanes even if their blood THC and alcohol concentrations were below the impairment thresholds for each substance alone.”

In the 2013-2014 United States National Roadside Survey, 12.6 percent of drivers on weekend nights tested positive for THC. This was significantly higher than the 8.6 percent who tested positive in 2007. To date, marijuana has been approved for recreational use in the United States in four states and Washington, D.C. While almost every country in the world has laws setting a legal limit for blood alcohol levels, few have equivalent laws in place for determining what amount of marijuana consumption makes motorists unfit to drive.

Alcohol’s detrimental effect on driving is well-known, but people may not realize that mixing drinking and marijuana, even in low doses, can have such a dramatic impact on driving safety.

“Clarification of the interactive effects of these drugs upon driving behavior is critical for reducing drug-related road deaths,” Downey and colleagues conclude.