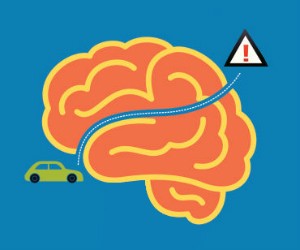 A team of psychological scientists in the Czech Republic is looking at the brains of bad drivers to understand why some of us flout the rules–putting others at risk of serious injury or death–while the rest of us abide by them.

In a recent study published in the journal NeuroImage, lead author Jana Zelinková of the Central European Institute of Technology found that while watching videos on traffic safety, people with a history of dangerous driving show relatively less activation in brain areas associated with social cognition and empathy compared to their law-abiding counterparts.

Traffic safety campaigns often try to appeal to our sense of empathy by highlighting the potential toll that risky driving can have on others. For this study, the researchers showed groups of drivers a series of public safety videos designed by the Czech government to elicit empathic and compassionate reactions towards the victims of various road-traffic accidents.

Zelinková and colleagues anticipated that dangerous drivers and safer drivers might show different brain activity in response to videos showing the tragic consequences of risky driving. Specifically, they hypothesized that safer drivers would show relatively greater activation in the superior temporal sulcus (STS), a region of the brain that is believed to be integral to our ability to process social information. Previous research has shown that activity in the STS is associated with facial recognition, empathy, and our ability to imagine the mental states of other people.

While in the scanner, all participants viewed a series of 12 short video clips of various driving scenarios in a random order. Six of the video clips came from the traffic safety awareness campaign that showed the catastrophic consequences of traffic accidents (such as resuscitation and death), that resulted from a variety of dangerous driving behaviors, including speeding or drunk driving. Six neutral control videos showed scenes of normal driving taken from car advertisements.

The fMRI results revealed that safe drivers showed greater STS activation than did dangerous drivers in response to the disturbing traffic safety videos.

After completing the session in the scanner, participants re-watched all of the videos and were asked to verbally describe and evaluate each video clip. The researchers then coded each verbal description for content related to empathy and affect. They found that subjects who were more focused on the consequences of actions of characters in the video also showed more activation of the STS brain region.

“In this light, greater STS activity indexes a greater interest in others rather than a self-focus,” the researchers conclude. “In other words, we suggest that dangerous drivers are less considerate of others in the situations comprising the videos.”

Zelinková and colleagues are continuing their research on the relationship between the STS and driver behavior, including evaluating the effectiveness of public safety campaigns and the responses they evoke at both the behavioral and neurophysiological levels.

How do they explain that young people is prone to take risks meanwhile older people is not?