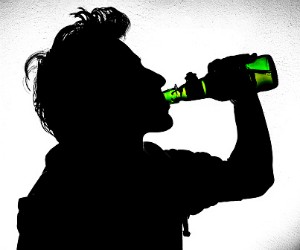 St. Patrick’s Day is often one of the deadliest days of the year on U.S. roads. Accompanying the local parades and green hats, a dramatic spike in alcohol-related driving fatalities is often seen during the holiday, according to the National Highway Traffic Safety Administration (NHTSA).

Alcohol not only affects motor skills and reaction times, but it also impacts people’s judgment. One reason that driving drunk is so dangerous: Alcohol increases people’s predilection for risky behavior.

A recent study, published in the journal Frontiers in Psychology, found evidence that as blood alcohol levels spike, people become more likely to indulge in decisions with risky outcomes.

Normally, people tend to avoid decisions in which the outcomes are uncertain, a phenomenon known as ambiguity aversion. But psychological scientists Tadeusz Tyszka, Anna Macko, and Maciej Stańczak from Kozminski University in Warsaw found that after a few drinks, people were much more willing to bet on a risky choice with unknown odds.

When it comes to finding a sober ride, revelers over the legal limit may find themselves more willing to risk the potential consequences of driving home buzzed instead of calling a cab and definitely making it home safely.

The researchers recruited 100 participants—46 women and 54 men ranging in age from 18 to 43 years—from a restaurant bar. Experimenters approached bar patrons and asked them if they would be interested in participating in a study on people’s accuracy in guessing their own blood alcohol levels.

Those who agreed to participant were taken to a separate room where they guessed their current blood alcohol concentration (BAC). Their actual BAC was then measured using a breathalyzer.

As a reward for their participation, volunteers were told that they could win free drink tickets. Each participant was told to draw a card from one of two jars.

One jar contained 15 free drink vouchers and 15 empty cards, so the odds of winning were 50/50. The second jar contained 30 coupons, including vouchers good for two free drinks at the bar as well as empty cards. However, participants had no idea how many free drink tickets were in this “ambiguous-choice” jar.

The research team found that higher levels of alcohol significantly impacted people’s willingness to bet on the risky ambiguous-choice jar—but only in males. Regardless of blood alcohol levels, women in the study preferred betting on the known 50/50 odds; however, the drunker male participants were, the more likely they were to choose the jar with unknown odds.

When BAC levels in males rose above 1.00% (the legal limit to drive in all U.S. states is at least .08%), they became more likely to choose the jar with the riskier, unknown odds.

The researchers suspect that part of the difference in risk-taking behavior between men and women can be explained by the fact that men are more often socialized to see risk-taking as a positive trait.

NHTSA advises drivers that before drinking and driving, they should consider the very real consequences of their actions and ensure that they have a safe way to get home. Over St. Patrick’s Day weekends from 2009 to 2013, there were a total of 276 lives lost in drunk-driving crashes in the United States.