News > Minds at Work > When to Make the First Move 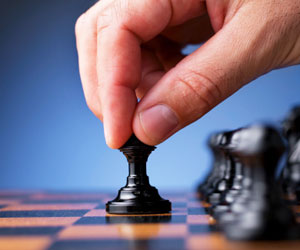 When Michael Jordan’s agent set out to negotiate a new contract with the Chicago Bulls for his client back in the mid 90s, he anticipated that the team’s managing partner would lowball the salary offer. So the agent opted to move first and requested an ambitious $52 million per year for Jordan. After a series of back and forth talks, the parties settled for an annual paycheck just above $30 million. By making the first offer — and doing so aggressively, at that — Jordan’s agent landed his client the single highest annual salary in the history of the National Basketball Association.

With this example in mind, an international team of researchers embarked on a study on the age-old debate about the wisdom of making the opening offer in negotiations. Some business experts argue that it’s best to make the first move, and to “set the bar high” when doing so. Others recommend waiting for an opening proposal, so you have information to help you craft a forceful counteroffer.

A plethora of experimental research suggests that it is best to move first.  In negotiations, people who receive an opening offer become psychologically anchored to that initial proposal – which usually takes the form of a numerical value.  All subsequent bargaining builds off that first number, studies show. So the higher your first demand (e.g., a salary requirement), the bigger the sum you can expect to extract in the final agreement.

Yet new psychological research shows that other factors influence the power of a first offer.

Investigators led by David D. Loschelder of Saarland University in Germany recruited MBA students — all with prior management experience — to break up into pairs and engage in a negotiation exercise. In each pair, one person played the role of a financial officer for a pharmaceutical company selling a manufacturing plant, and the other participant played the role of a financial officer for the company buying the facility. In addition to the plant’s price, a key issue in the negotiations involved the date when the seller would transfer the plant to the buyer. Some pairs were set up to have opposing interests over the transfer date.  In this condition, sellers were led to prefer a later transfer date that would allow them time to complete some lucrative projects and gain additional profits. The buyers, meanwhile, were compelled to prefer an earlier transfer date so they could get started on lucrative initiatives and maximize their bottom lines.  Other pairs of students were placed in a different condition, in which both parties benefited equally from a later transfer date (although neither side knew in advance about the others’ preferences.)

When participants reported their final agreements, results showed that the individuals who made more extreme and self-serving first offers (akin to Jordan’s original salary demand) secured higher profits than their negotiation partners.

In contrast, participants who opened up the dialogue by revealing compatible interests gained lower profits in the final deal.  The people receiving those types of offers were able to spot the most fluid components in the opening offer, and finagle more concessions from the other side.

In a second experiment, Loschelder and his team tested the effects that negotiators’ social values have on the deal-making.

In this phase, business school students engaged in an exercise similar to the earlier study, but this time the experimenters also had participants engage in a series of games designed to measure their social traits, such as how selfish vs. prosocial they usually act.

As in the first experiment, people making an opening offer won fewer gains when they disclosed their preferences on the more tractable issues. But the first-mover disadvantage was lighter when the person receiving that information manifested more cooperative (rather than selfish) character traits.

At the same time, individuals tended to gain more profits when they made a first offer that centered only on discordant issues such as the prize, the experiment showed.

The researchers say their findings suggest the first offers should only center on issues that involve opposing interests, especially when the other side appears to be significantly self-serving.

“[O]ur findings speak to the importance of gathering information and identifying the nature of the negotiation issues before a first offer is put on the bargaining table,” they say.

News > Minds at Work > When to Make the First Move