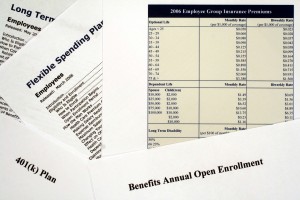 Getting employees to sign up for the company health plan, the 401(k), and other benefits can often be as daunting as getting a cat to fetch a stick. Researchers have learned that options and services too often falter because they’re designed to depend on people taking some kind of action. Studies show that relying on inaction yields better results.

Some experiments with organ donation serve as a model. In the United States, 85 percent of Americans say they approve of organ donation, but only 28 percent give their consent to be donors by signing a donor card. The difference means that far more Americans die awaiting transplants. But psychologists Eric J. Johnson, a professor at Columbia University Business School, and Daniel Goldstein, formerly at Yahoo and now a principal researcher at Microsoft Research, found in a 2003 study that in many European countries, individuals are automatically organ donors unless they opt not to be — organ donation is the default choice. In most of these countries, fewer than 1 percent of citizens opt out.  In an article published in Science in 2003, Johnson and Goldstein theorized that opting out in those countries was simply too much of a hassle for most people, since it involved “filling out forms, making phone calls, and sending mail.”

How can that “hassle” effect be applied to benefits enrollment?

Harvard economics professor David Laibson, whose research focuses on the psychology of savings and investment, has found that defaults counter workers’ tendencies to delay enrollment in employer-provided retirement plans. The problem with those savings benefits, he says, is that people are beset with present bias, which leads them to avoid thinking about their future. As a consequence, only about half of U.S. employees save sufficient sums for retirement, he says, largely because on average they wait two years to enroll in a 401(k) program. Only about 40 percent of employees typically enroll in a company retirement plan when they have to enroll themselves. But in one of his studies, Liabson showed that when newly hired workers have to act to “opt out” rather than “opt in” to those savings plans, participation jumped to 90 percent in a year.

So getting employees to take care of themselves may mean you have to design your benefits programs around their inertia.

Learn about other behavioral economics research in Observer, the monthly magazine of the Association for Psychological Science.