News > Minds at Work > The Kryptonite of Smart Decisions? Overconfidence 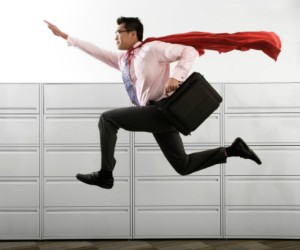 Research shows that people in general are overconfident, but entrepreneurs appear to be particularly prone to cockiness.

About half of new companies fail within five years, according to the US Bureau of Labor Statistics. Despite the imposing failure rate for new businesses, entrepreneurs are often quite confident that their ventures are going to succeed. One survey of 3,000 entrepreneurs found that 81% believed that their chance of success was 70% or higher; and a whopping 33% estimated their chance of success to be 100%.

New research from psychological scientists Daylian Cain (Yale University), Don A. Moore (University of California, Berkeley), and Uriel Haran (Ben-Gurion University of the Negev) suggests that entrepreneurs may be the victims of their own better-than-average beliefs.

Across three experiments, the researchers showed that the better a person believes they are relative to others on a task, the higher the likelihood that they will decide to compete on that task. This overconfidence leads to larger numbers of competitors in “easy” markets, which could provide one reason why so many entrepreneurs make the mistake of confidently entering markets that are already overflowing with competition.

“Naturally, if people believe their chance of success is higher than that of the competition, it will increase their willingness to enter contests or start new businesses, even when their objective chances of succeeding are not particularly good,” the researchers explain.

In one of their overconfidence studies, 160 participants completed two math and logic puzzles – one easy and one difficult. After completing the quizzes, they could choose to enter one of their quiz scores into a competition market against other anonymous players.

The higher their score relative to other competitors, the more “tickets” they would be able to enter into a drawing for a cash prize, and the higher their chance of winning. Half of the participants were told that the difficult quiz was associated with a large prize ($90) and the easy quiz was associated with a smaller prize ($45), whereas the prize values were reversed for the other group of participants.

Regardless of prize size, people overwhelmingly preferred to compete in the easy-quiz market: Only 53 individuals chose to compete in the difficult-quiz market. This meant that the easy market was flooded with competition, driving the odds of winning the cash prize down.

This finding supports previous research on overconfidence conducted by Moore and Albert Mannes of the University of Pennsylvania. In a study published in Psychological Science, Moore and Mannes found that people tended to overconfident in their estimates, even after receiving accurate feedback.

When it comes to opening a new business, Cain and colleagues make the argument that it is not whether one can make a hamburger that leads to success at opening a burger joint, but whether one can do so better than the competition.

“When it comes to relative standing, the performance of one’s competition can be just as important as one’s own performance,” they conclude. “As the old joke goes, when two campers are being chased by a hungry bear, it is not necessary to outrun the bear—only to outrun the other camper.”

News > Minds at Work > The Kryptonite of Smart Decisions? Overconfidence