For many veterans, the leap from military service to corporate cubicle can be a difficult career transition. Since 2001, nearly 3 million members of the U.S. military have completed their service and returned to civilian life. However, the unemployment rate for veterans remains high – particularly among younger veterans who have served since 2001. 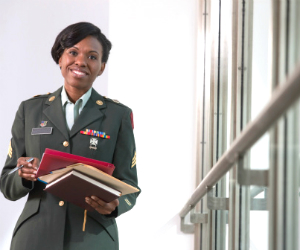 New research from Stacie Furst-Holloway, an associate professor in the department of psychology at the University of Cincinnati, identifies strategies that organizations can use to help keep veterans on the job once they’re hired.

“We can focus on hiring, but if we don’t tie that to the bigger picture in terms of retention as well, then we’re missing half the picture,” says Furst-Holloway.

The research, completed with the Veterans Health Administration’s National Center for Organization Development (NCOD), was presented in May at the Society for Industrial and Organizational Psychology (SIOP) annual conference.

For the study, Furst-Holloway examined employee data from the Department of Veterans Affairs (VA), where 34.5% of the permanent workforce is made up of 108,000 veterans.

Analyses of employee data from the VA’s Personnel and Accounting Integrated Database and the VA All Employee Survey database, Furst-Holloway found that veterans working at the VA tended to have shorter job tenure, more job turnover, and lower performance ratings than their non-veteran colleagues.

The researchers identified several differences between veteran and non-veteran employees that could explain these discrepancies in job retention.

For example, veterans were far more likely to be hired into lower-level positions in the VA compared to their non-veteran peers, despite the fact that they tended to have as much work experience as non-veterans.

According to Furst-Holloway, veterans who possess the knowledge and skills for a job may end up being hired for lower level positions because they lack the civilian credentials or education that employers typically expect and because employers may have difficulty translating military skills into more traditional work experience. Veterans who feel underemployed may end up perceiving such lower level jobs as a bad match, leading to higher rates of turnover and job dissatisfaction.

The data also indicated that veterans tended to report lower perceptions of their jobs (less job satisfaction, employee development opportunities, workplace innovation, promotion opportunity, and work/family balance) despite stronger feelings of commitment to the mission and values of the VA than their non-veteran colleagues.

Furst-Holloway warns that although several major U.S. employers have committed to increasing the number of veteran hires over the next few years, focusing solely on boosting recruitment numbers may backfire if HR practices aren’t also updated to help accommodate veterans.

Thus, the next challenge for employers is to identify specific “veteran friendly” HR practices, such as matching military skills sets with civilian job descriptions, to help smooth the work transition and improve job fit for veterans. Another potential solution is developing interim vocational training that can be incorporated into existing reintegration programs.

“You want to hire veterans into jobs where they will be successful and happy with the work they’re doing. That’s the golden ticket,” says Furst-Holloway.

Any opinions, findings, conclusions, or recommendations expressed in this material are those of the research investigator [or author] and do not necessarily represent the view of the Department of Veterans Affairs or U.S. Government