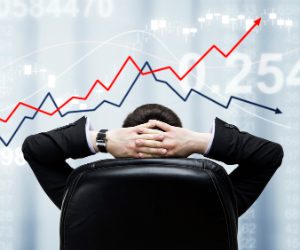 When it comes to decisions about buying and selling, businesses are supposed to use evidence and observations about the market for goods to make profitable decisions. In classical economics, it’s assumed that people make financial decisions based on rational rules of thumb—buy low, sell high, diversify portfolios, that kind of thing. But the reality about how we make financial decisions appears to be much more complicated than simply assessing the rational value of goods.

For example, people commonly demand a greater price for goods they already own than they would pay to purchase the identical goods from somewhere else—a bias known as the “endowment effect.” Not only do we overestimate the value of our used furniture, cars, and knick-knacks, but evidence suggests this bias also plays a role in influencing economic markets on a global scale.

Previous research suggests that as people gain more experience in buying and selling goods, they become less influenced by the endowment effect. In a recent study, APS Fellow Howard Nusbaum (The University of Chicago) and an interdisciplinary team of behavioral scientists from Australia and Turkey used neuroimaging to examine the neural mechanisms associated with the endowment effect.

They found that while making trades people with more experience buying and selling showed relatively reduced activity in areas of the brain associated with negative emotions and loss aversion. With more experience, people were also less biased by the endowment effect while making trades. This suggests that exposure to buying and selling can help mitigate the endowment effect, allowing people to make better, more accurate business decisions.

Participants in the first study included 18 experienced eBay traders and 12 inexperienced eBay traders who ranged from 24 to 58 years old. While in the scanner, participants could use a slider bar to indicate the top price that they were willing to pay (from $0 to $50) for products such as such as a thumb drive, comfort lap desk, electric toothbrush, or headphones. During the selling task, participants were “endowed” with wooden blocks in their hands and asked to imagine they were holding the objects they were selling.

Compared to the inexperienced sellers, the group of experienced sellers showed less activity in the right anterior insula—an area of the brain that has previously been implicated in loss aversion. Essentially, the results suggest that inexperienced buyers felt the pangs of a potential financial loss much more intensely than their more experienced peers.

In a second experiment, the researchers recruited a group of inexperienced traders from antique markets in Chicago. After completing the same buying and selling task from the first study, the 15 participants received a goody bag of items and were asked to sell them on eBay. Participants were given a lottery ticket to win a cash prize of $1,000 each time they successfully listed or sold an item on eBay. Two months later, they came back into the lab for a follow-up scan.

The results of the second scan revealed that even a little practice at buying and selling can yield a noticeable effect on participants’ susceptibility to the endowment effect; the researchers observed were measurable reductions in participants’ insula activity after just a few months of casual practice buying and selling. Participants also showed less of an endowment effect during the second round of the experiment.

“The effect we observe in Study 2 is particularly striking given the briefness of our intervention, suggesting that novice traders may reach criterion levels on the endowment effect quite quickly,” The researchers write. “Nevertheless, more extensive efforts are needed to determine the specific aspects of experience that most effectively reduce decision biases.”

This isn’t the first experiment to show a link between activation in the insula and financial decision-making. In a 2008 study published in Psychological Science, a team of Stanford University researchers led by Gregory Samanez-Larkin also found a link between loss aversion and insula responsiveness. Their findings showed that even after a few months, activity in the insula could predict whether participants had learned to avoid financially costly biases.