From basketball to brain surgery, people can accomplish more working together as a team than they ever could by themselves. As Aristotle famously put it, “The whole is greater than the sum of its parts.” In an article recently published in Current Directions in Psychological Science, psychological scientist Jamie C. Gorman of Texas Tech University outlined new research that is improving our understanding of the cognitive and environmental factors that allow people to work together effectively in teams.

Previous studies have shown that shared knowledge between individuals enhances coordination within a team. These improvements in coordination, in turn, boost the team’s performance. When people share the same overlapping 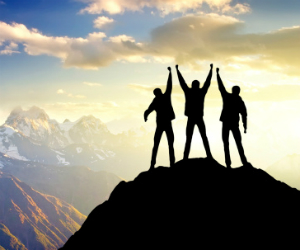 knowledge – like a team of basketball players that have all studied the same play – they can better communicate and coordinate, freeing up mental resources and allowing the team to attain higher levels of performance.

It might seem like the best way to assemble the perfect team is simply to recruit as many top experts as possible. However, effective teams need to be able to work just as well under tough, unexpected scenarios as they do during the normal day-to-day ones. A group of experts may perform well under normal circumstances, but how well will they work as a team when facing an unexpected challenge?

Counter to the “shared knowledge” approach, Gorman’s research suggests that dynamic real-time interactions between people may have a powerful effect on team performance. Several studies have found that the act of “jostling” teams into new patterns, known as perturbation training, may improve coordination between team members by encouraging people to become more flexible and adaptable in new situations, rather than relying on rigid, rehearsed patterns of behavior.

In one experiment, teams of three were trained to operate an unmanned aerial vehicle (UAV) simulator. The teams were instructed to coordinate together in order to take reconnaissance photographs of ground targets.

During each mission, the team was interrupted by a perturbation “roadblock,” such as enemy activity or glitches in communications systems, a designed to disrupt their assignment. In a second session, team members returned to either the same team they’d worked with in the first session (intact team), or a new team made up of different people (mixed team).

While the traditional shared knowledge approach predicts that the intact teams should coordinate more effectively because they’ve worked together longer, Gorman and colleagues found that the mixed teams were more flexible than familiar teams and were more successful at handling novel and unanticipated problems as they came up.

Additional experiments found that mixed teams were better at coordination and rapidly became just as proficient as familiar teams.

“The idea behind perturbation training is to ’exercise‘ team coordination by introducing brief external disturbances (i.e., perturbations) to coordinative links that force teams to organize new solutions to coordination problems,” writes Gorman. “Under novel task conditions, perturbation-trained teams outperformed teams that were either trained on each other’s roles to increase shared knowledge.”

In addition to looking at how teams handle problems, Gorman’s research has also found that coordination between individuals may involve multiple levels of psychological and physiological interaction.

These results suggest that high quality teamwork and our abilities to communicate, adapt, and learn in teams may be influenced by our physiological factors working in tandem.