Smiling can be a disarming expression on a date or at a social gathering. But in the boardroom, it could prove perilous.

A new psychological study examines how the interpretation of facial expressions can impact economic decision making in a business setting.

“A business person in a negotiation should be careful about managing his or her emotions because the person across the table is making inferences based on facial expressions,” said Peter Carnevale, professor of management and organization at the University of Southern California’s Marshall School of Business. “For example, a smile at the wrong time can discourage cooperation.” 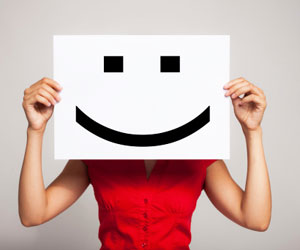 The study—a joint project between Carnevale and Celso M. de Melo, a postdoctoral research associate at Marshall, as well as colleagues at the USC Institute for Creative Technologies (ICT) and the Dornsife College of Letters, Arts and Sciences—illustrates the nuanced role emotion plays in business interactions, indicating that what you show on your face is as important as what you say in negotiation and what you do with your negotiation offers.

“Facial expressions that emphasize different kinds of emotions give meaning to normal conversation,” Carnevale says. “Good negotiators are adept at making offers and talking in negotiation, but also at managing their facial expressions.”

To test the impact that emotional expression can have on negotiations, the researchers paired individuals with computer-generated images of an opposing negotiator in five related experiments. Each experiment featured a two-person task in which the payoffs for each player depended on the simultaneous choice of both players. If both players invested— that is, if they cooperated—both earned money. If neither player invested, neither earned money. And, if one player invested and the other player did not, the non-investor outperformed the investor by taking advantage of the investment without putting in any effort or money. This task represents a classic problem in interdependence and economic decision-making.

Carnevale and colleagues found that people cooperated significantly more with a computer counterpart that smiled when cooperating and expressing sorrow after exploiting the participant. In other words, the study results indicate that context can determine the meaning ascribed to a counterpart’s emotional expression and subsequent reactions.

“If you come to an agreement in a negotiation and you are really happy, it may not be a good idea to show how happy you are because it might lead the other person to think that you did better than they did,” said Carnevale. “But in other circumstances, showing strong emotion may be the ticket to success.”

The study appears in the Journal of Personality and Social Psychology.