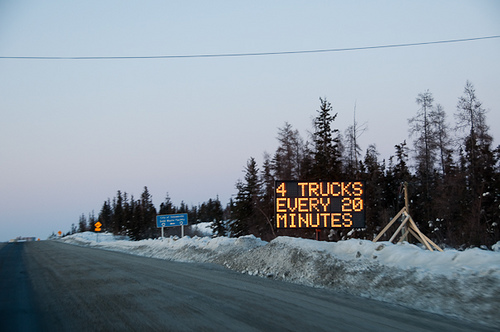 One of my guilty pleasures is the TV show Ice Road Truckers, which tells the stories of the heavy haulers who deliver vital supplies to remote Arctic territories of Alaska and Canada. In just two months each year, these truckers make more than 10,000 runs over hundreds of miles of frozen lakes, known as ice roads. We get to share in the treacherous drives—and just as important, the personal travails—of the veteran Hugh “The Polar Bear” Rowland, the brash tattooed Rick Yemm, the cold-hating rookie T.J. Wilcox, and former school bus driver and motocross champ Lisa Kelly, one of the rare women to break into this man’s world.

I’m not alone in this fascination. Millions of viewers have tuned into every episode of Ice Road Truckers since its premiere in 2007. And if hazardous driving is not your cup of Joe, how about Ax Men or Dance Moms, Chef School or Bikini Barbershop, Sister Wives or Biggest Loser? Reality TV dominates small-screen viewing these days. Viewers have literally hundreds of choices in vicarious viewing every day, 24 hours a day. And so what if they’re not exactly real.

What explains this trend? Well, it’s in part simple economics. These shows are cheap to make. But it’s more than that. There is something compelling about people’s stories, something that taps into a deep human need for narrative. The pull of Deadliest Catch and Here Comes Honey Boo Boo can really be traced back to ancient story telling traditions, which exist in every world culture. We see parts of ourselves in these modern-day folk tales, just as we construct stories about our own personal realities.

Psychological scientists have in recent years begun to examine this deep human yearning for story—in particular our need to create a coherent narrative identity. They have been using narrative identity as both an indicator of psychological health and a possible tool for enhancing well-being. Much of this work has been done by Northwestern University’s Dan McAdams and Western Washington University’s Kate McLean, who describe their and others’ research in a forthcoming issue of the journal Current Directions in Psychological Science.

We all construct a coherent narrative identity, according to the emerging theory, from the accumulated particulars of our autobiographies as well as our envisioned goals. We internalize this story over time, and use it to convey to ourselves and others who we are, where we came from, and where we think we’re heading. Consider the example of redemption. McAdams and other scientists have been asking people to narrate scenes and extended stories from their past, and then they code the accounts for key ideas like redemption and self-determination and community. They have found that people who include themes of redemption in their stories—a marked transition from bad to good—are less focused on themselves and more focused on community and the future. They’re more mature emotionally.

This is just one example of how people make narrative sense of the suffering in their lives. Others have studied how people narrate life challenges, such as a painful divorce or a child’s illness, and they have found that those who produce detailed accounts of loss are better adapted psychologically. Their narratives often strike themes of growth and learning and transformation. Importantly, the stories of the well-adapted have endings, positive resolutions of bad experiences.

Psychotherapy is largely about personal narratives. Therapists help their clients to “re-story” their lives by finding more positive narratives for unhappy experiences. Indeed, when scientists asked former psychotherapy patients to describe how they remembered their therapeutic experience, the healthier ones told heroic stories, tales in which they bravely battled their symptoms and emerged victorious. This narrative theme of personal control was also and by far the best predictor of therapeutic success: As patients’ stories increasingly emphasized self-determination, these patients’ symptoms abated and their health improved. The stories themselves created an identity that was mature and well-adjusted.

News > Full Frontal Psychology > Who Am I? The Heroes of Our Minds