News > Full Frontal Psychology > Throwing Light on the Dark Side 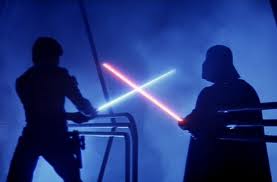 Long ago, in a galaxy far, far away, there may be someone who has not heard of “the dark side.” But I think that’s unlikely. Whether you are a Star Wars aficionado or not, there is no doubt that these hugely popular movies have saturated the culture and the common vocabulary. As Jedi knight Obi-Wan Kenobi explained to the innocent young Luke Skywalker in the original 1977 film, the once virtuous Darth Vader was seduced by the dark side of the Force, his destructive power fueled by rage and hate. The dark side is all the galaxy’s evils rolled together.

Of course, Star Wars creator George Lucas did not invent the metaphor of the dark side. Not even remotely. From Shakespeare to the Bible and other sacred texts, darkness has been inextricably linked with malevolence and condemnation, and light with goodness. But why? Where does this seemingly universal metaphor come from, and how does it shape our psychology?

One popular idea is that metaphors are rooted in basic sensory experience. The dark side may help us understand and communicate abstract ideas like immorality and evil, but the metaphor gets its power from our actual perceptions of the world around us. At least that’s the theory, which University of Kansas psychological scientist Promothesh Chatterjee and his colleagues decided to put to the test in a couple of simple laboratory experiments.

They started by “priming” moral or immoral thoughts in a group of volunteers. They asked them to recall and describe in vivid detail an actual instance from their past in which they behaved either ethically or unethically—cheating on an expense account, for instance, or returning a lost wallet. The volunteers also described any emotions, positive or negative, associated with these recollections. The scientists then asked the volunteers to judge the brightness of the room. Chatterjee expected that those with immoral thoughts would see their world as darker—and that’s exactly what he found. Those feeling righteous judged the room as brighter; those feeling sinful perceived it as dimly lit.

These findings support the notion that the mind’s idea of malevolence is rooted in bodily experience. Abstract thinking does indeed appear to influence basic sensory experience. But Chatterjee wanted to go a step further, to see if this activated metaphor can actually shape behavior. If an unethical person’s world becomes dark, will he or she attempt to brighten it—and thus cope metaphorically with unethical thoughts?

The second experiment started off the same as the first, with volunteers recalling either a righteous or immoral act. But this time around, they indicated their preferences, strong or weak, for a variety of common products: a jug, a lamp, crackers, a candle, an apple, a flashlight. The idea was that those who were focused on their unethical past would not only see the world as dark, they would take action to dispel the darkness.

And, again, that’s what the researchers found. As described in the on-line version of the journal Psychological Science, the immoral volunteers expressed a much stronger preference for the products associated with light: the lamp, candle and flashlight. Unconsciously, they were feeling compelled to make up for their transgressions by artificially brightening their environment.

The scientists believe that the volunteers’ actions are motivated by guilt rather than shame. When people feel shame, they want to escape and hide. Darkness is a good place for that. But when people feel guilt, they want to alleviate the negative feelings. Literally throwing light on the darkness appears to dampen the guilty pangs so tightly but unconsciously entwined with the dark side. And when no lightsaber is handy, an ordinary flashlight has to do.

Wray Herbert’s book, On Second Thought, devotes a chapter to the power of bodily metaphors in human judgment and decision making. Excerpts from his two blogs—“Full Frontal Psychology” and “We’re Only Human”—appear regularly in The Huffington Post and in Scientific American Mind.

News > Full Frontal Psychology > Throwing Light on the Dark Side

I wonder if the associations between light-good and dark-bad reflect that humans are diurnal, active during daylight. Would an intelligent nocturnal species see the light as sun-burning, blinding, and infested with big-toothed predators, and therefore evil, or would the ability of darkness to hide danger or wrong-doing still be stronger? I have trouble thinking that even nocturnal species would associate light with evil, but those associations may have to be deeply engrained in order for a species to maintain a night or daylight preference.

Perhaps living in the light requires a relative dominance, as visual predators can see what stirs in the daylight, where living in the dark seems like a form of permanent hiding. If growing intelligent itself happens to both require and convey a sort of diurnal dominance, then perhaps there is a natural and universal association between light and good, dark-evil.