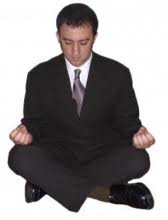 I have been experimenting with mindfulness meditation recently. Originally a Buddhist practice, mindfulness meditation focuses on moment-to-moment awareness, of one’s body and its sensations and one’s immediate surroundings. When thoughts intrude on this aware state—as they always do—you gently let them go as you return to the moment. It’s very calming—and really hard.

It’s hard because the mind does not want to stop churning out thoughts. I’m told that with time and practice, meditation becomes easier, and what’s more that it brings a variety of emotional and health benefits. Those testimonials are why I’m doing this, but I confess the prospect is daunting. Expert Buddhist practitioners log some 10,000 hours of training, and even neophytes should expect to log 70 or more hours of training, over months, before seeing any noticeable benefits.

So imagine how encouraged I was to come across a recent study that seems designed for impatient souls like me. Psychological scientist Christopher Moyer, and a large group of colleagues at the University of Wisconsin—Stout, designed a brain study to see if there might be at least some benefit after a very brief period of meditation training. It’s a small study, and the first of its kind.

The scientists recruited a group of volunteers, ranging in age from 18 to 73, all interested but inexperienced at meditation practice. The volunteers completed an emotional inventory before starting the study, and they also closed their eyes and tried to meditate for 18 minutes on their own. All they were told was to focus on their breathing, and if thoughts intruded, to re-focus their attention on their breathing. During this trial, they were hooked up to an EEG, which measured their baseline brain activity.

The participants had volunteered in exchange for training by experienced instructors, and half were immediately enrolled in such training. The others were wait-listed; they received training later on, but served as controls for the brain study. In the actual study, the meditation trainees were offered nine 30-minute sessions over five weeks, each session consisting of a short lesson and five to 20 minutes of “sitting.” After the five weeks, all of the volunteers—trainees and controls—repeated the 18-minute meditation trial, again hooked up to the EEG.

The results got my attention. As reported on-line in the journal Psychological Science, the trainees ended up averaging fewer than seven sessions, and meditated at home just a couple times a week—so they only got about six hours of training and practice in all over the five weeks. That comes to minutes a day, not hours. But even with this very modest commitment of time, the novices showed a significant shift in brain activity from their right to their left frontal hemispheres over the course of the study. Such brain asymmetry is associated with a shift to more positive emotional processing. In short, the promised benefits of meditation may be much more accessible than previously thought.

It’s not clear from these results whether these brain changes are lasting, or if they are limited to actual meditation and its immediate aftermath. I also anticipate that some purists will object to the whole idea that beginners would want to get something for nothing. But really, for newcomers to a practice so unfamiliar, even evidence of a temporary shift away from negative emotions is something to build on, and keep us coming back.

Wray Herbert’s book, On Second Thought, is out in paperback. Excerpts from his two blogs—“Full Frontal Psychology” and “We’re Only Human”—appear regularly in The Huffington Post and in Scientific American Mind.