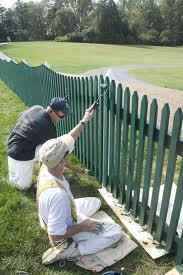 I have a fence that needs scraping and painting, and I’m pretty sure I can do the whole job in six hours. My friend Jack, who is an experienced painter, wants me to hire him. He promises he can have a new coat of paint on the fence in four hours. I’m tempted, but I’m wondering, what if Jack and I work together? If he does the trim and other detail work, and I do the easy brushing, we should be able to wrap this job up by lunchtime, easy.

But how long will it take, exactly? This is what, in algebra, we call a “word problem.” I always loved word problems when I was in school, because unlike a lot of math, they seemed connected to natural situations that actually occur in real life. Fences do need painting, and fence owners may indeed want to make everyday calculations like this one.

Such problems are also appealing because they are expressed in natural language, with familiar linguistic syntax, rather than abstract symbols. In fact, one influential psychological theory holds that everyday language and algebra share a common cognitive foundation—and may actually be processed in the same part of the brain.

But is this true? Is algebra really like the language we read and speak and hear all the time, or is it—despite its familiarity and accessibility—more like calculus and trig? Psychological scientist Martin Monti of UCLA decided to explore this question in a study using brain scanners. He wanted to see what parts of the brain are active during both linguistic and algebraic problem solving—and if it is the same part, as the dominant theory argues.

Monti asked a group of adult volunteers to analyze a large number of simple arguments, some describing simple scenarios–“X gave Y to Z”–and others describing  algebraic expressions–“X plus Y equals Z.” In a word problem, for example, volunteers might see these two sentences: “Y gave X to Z” and “It was X that Y gave to Z.” They had to reason whether or not the two statements were equivalent in meaning (as they are here), with only the structure altered. They performed similar comparisons with algebraic expressions, all of this while undergoing fMRI scans of their brains.

The results were unambiguous. As reported on-line in the journal Psychological Science, the “syntax-like” operations of algebra are completely disconnected, neurologically, from the processing of words and sentences. Other than the basic grammar needed simply to read the word problems, algebraic processing did not make use of any of the brain’s linguistic resources. Indeed, algebra appears from the scans to be processed in a different brain region entirely, one known as the seat of arithmetical reasoning.

The reigning theory of human thinking argues not only that algebra and language share a neurological foundation, but that mathematical reasoning co-opted the evolved machinery of language for non-linguistic tasks. These findings may begin to topple that influential view, though they won’t make it any simpler to solve for X—or to get that fence scraped and painted.

Wray Herbert’s book, On Second Thought, is about irrational thinking and decision making. Excerpts from his two blogs—“Full Frontal Psychology” and “We’re Only Human”—appear regularly in Scientific American Mind and in The Huffington Post.

News > Full Frontal Psychology > Solving for X, among the neurons

In a guest column, renowned architecture critic Sarah Williams Goldhagen applauds psychological science for fostering new understanding about the links between our surroundings and our health, well-being, and development. More