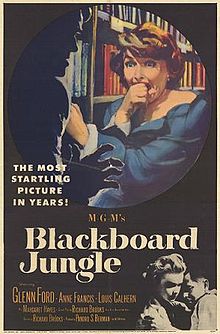 The 1955 movie Blackboard Jungle was not great filmmaking, but it does endure as a historical curiosity. Even before a word of dialogue is spoken, the movie’s scrolling introduction makes clear that this is not just storytelling, but an earnest public service announcement: “Today we are concerned with juvenile delinquency,” it declares, “—its causes—and its effects.”

And indeed the nation was concerned with juvenile delinquency in the 50s. Obsessed, really. Blackboard Jungle captured society’s fear of an entire generation of post-World War II teenagers, who were perceived as disrespectful, alienated, reckless, and most of all dangerous. It’s the same obsession that motivated Sen. Estes Kefauver, a presidential hopeful, to convene a special subcommittee to examine the root causes of juvenile delinquency, a move that landed him and his cause on the cover of Time magazine.

One of the root causes that the lawmakers focused on back then was comic books, an idea that seems quaint today. Another was rock-and-roll, just emerging in the popular culture. Over the years—long before and after 1950s America—experts have targeted everything from genes to poverty to poor parenting and worse teachers as the source of teenage misbehavior.

Now comes a fresh idea from psychological science. Jean-Louis van Gelder, of the Netherlands Institute for the Study of Crime and Law Enforcement, was intrigued by juvenile delinquents’ conspicuous short-sightedness. These young people appear overly focused on immediate rewards—money, sex, stimulation—with little regard for distant costs. This seems obvious in a way—that’s why they commit crimes and end up in jail. But van Gelder wondered why delinquents are so singularly focused on the here and now. What’s the mechanism underlying this self-destructive decision making?

Working with Hal Hershfield of NYU and Loran Nordgren of Northwestern, van Gelder decided to explore the possibility that juvenile delinquents suffer from a specific cognitive deficit, one that makes it very difficult for them to imagine their future selves. If teenagers cannot see themselves as 40-year-olds—vividly and concretely—then how can they envision themselves paying a price for youthful risk taking? The scientists ran a couple experiments to test this idea in the lab.

In the first one, they asked young adults—early 20s—to write letters to their future selves. Some wrote to a future self 20 years hence; others to a future self three months into the future. Then they were given a series of dilemmas in which they had to make choices: You need a computer, and hear of an opportunity to get hot computers cheap. Would you buy the stolen goods? Other dilemmas involved theft, insurance fraud, piracy, and similar crimes. They wanted to see if those who saw themselves in the distant future would be less likely to cheat and steal in their 20s.

They were. Those who looked ahead into their 40s were significantly less likely to buy stolen computers, commit insurance fraud, and so forth. Merely contemplating a future self altered delinquent decision making—making the young adults more prudent. The control group in important here: Imagining oneself three months into the future should also make people think about consequences, since many consequences of criminal acts come fairly quickly—arrest, for example. So it wasn’t thinking about the costs of delinquency that changed their choices. It was the act of being a 40-year-old, at least for a few minutes, in the mind’s eye.

The scientists wanted to look at this possibility again, in a different way, and they came up with a novel strategy. In a second experiment, instead of merely imagining a future self, volunteers used virtual reality technology to actually “meet” highly realistic, age-morphed versions of themselves. They met their avatars while immersed in a virtual world, from which all evidence of the real world had been removed—giving the impression of leaving the present and experiencing themselves many years ahead. The control subjects also entered such a world, but they encounter avatars who had not been aged-morphed.

The scientists also made the delinquency test more realistic in this version of the study. After the virtual reality experience, volunteers took a trivia quiz, in which they could win cash. But the quiz was rigged to make it almost impossible—so all the volunteers would fail. They were on the honor system—that is, they scored themselves and took the cash reward if they did well. But since they could not do well, it could be safely assumed that anyone taking the reward was in fact cheating.

The scientists expected volunteers who had met their future, virtual self to cheat less. And that’s what they found. As described in a forthcoming issue of the journal Psychological Science, those who had “seen” themselves with the age wrinkles of 40-year-olds were much more honest than the controls, almost never taking cash rewards they had not earned. So it appears that the vividness of the future self is the key to making prudent decisions in the here and now—and diminishing criminal propensity.

I can anticipate protests: These were just petty crimes, not true delinquency, with its drugs and high-speed driving and illegal guns. Well, yes—but as the scientist note, even “minor” deviant acts have something in common with criminal acts. People who steal cars and rob banks are also more likely to smoke and drink and do drugs and break into houses—and even cheat on their high school geometry test. Criminal careers don’t begin with big heists—but with rule violations, like cheating on the honor system.

The scientists also want to distinguish this approach—and its possible practical applications—from “scared straight” programs, which also use future consequences to deter delinquency. A key difference, they argue, is that “scared straight” interventions rely on a hypothetical future to scare teenagers: If you keep up with this delinquency, you may end up behind prison bars like these hardened criminals. They rely on emotional arousal—fear—to change behavior, but the emotional arousal doesn’t last—which is probably why the programs don’t work very effectively.

By contrast, aging is inevitable and real. Focusing on actual aging changes thinking and imagination—and might—possibly—lead to more lasting change.

Excerpts from Wray Herbert’s two blogs—“Full Frontal Psychology” and “We’re Only Human”—appear regularly in The Huffington Post and in Scientific American Mind.