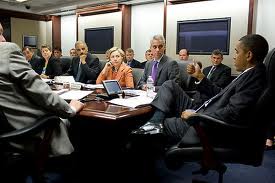 I love reading accounts of the West Wing’s inner workings, because they are studies in the quirkiness of human psychology. Presidents and their trusted staffs always arrive in the White House with a unified message and team spirit, and they inevitably disintegrate into factions—ideological purists and pragmatists, seasoned vets and young Turks. It’s just as true of Obama’s West Wing today as it was of Nixon’s and FDR’s, and probably every presidency back to the founding.

The common wisdom is that such factions are a bad thing, not just for the White House but for any complex organization. Internal bickering takes key leaders off message and saps energy and hurts job performance. But Margaret Ormiston isn’t so sure. Ormiston is a psychological scientist at the London Business School, and together with Elaine Wong of the University of Wisconsin—Milwaukee, she has been studying the consequences of such organizational fragmentation. Her work suggests that disunity may actually have some hidden benefits, including the promotion of more ethical business practices.

The scientists’ theory goes like this: As unified leadership teams splinter into factions, the key players become more competitive and more vigilant in monitoring one another. Competition and monitoring have downsides, but they can also influence organizational decision making in positive ways. Specifically, factions foster intense scrutiny and discussion of competing agendas, which in turn lead to more ethical choices and judgments.

To test this idea, Ormiston and Wong examined existing data on leadership teams at about fifty Fortune 500 companies. They ranked each leadership team’s degree of fragmentation, based on tenure and education as well as the homogeneity of competing factions. They also measured how centralized, or decentralized, the decision making power was in each company—figuring that disunity would be more beneficial in organizations where decision making power was dispersed. Finally, they examined each company’s ethical record over a three-year period—measures like charitable giving, for example, or disregard for the local community economics.

When they crunched all the data together, the results were unambiguous. As reported on-line in the journal Psychological Science, the more fragmented a company’s upper management was, the more ethical its record—but only in organizations where decision making was decentralized. In companies that consolidated power at the top, fragmentation did not lead to more ethical decision making. It just led to fragmentation. That’s a lesson for any organization, whether its business is business or governing.