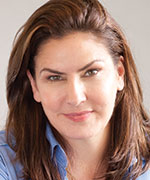 Elizabeth A. Phelps
New York University
APS President 2013 - 2014
All columns
In this Issue:
From Inconvenient Truth to Urgent Opportunity