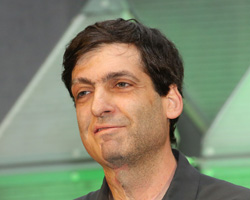 True to form, Dan Ariely packed his Fred Kavli Keynote Address with plenty of jokes and humorous anecdotes in the opening night of the 2016 APS Annual Convention in Chicago. But his 40-minute speech still incorporated plenty of the behavioral science that has made him famous.

Ariely, the James B. Duke Professor of Psychology and Behavioral Economics at Duke University, discussed his years of research, involving tens of thousands of study participants, showing how people cheat or lie just a little — in a way that still allows them to view themselves as generally honest and decent people. From downloading pirated music to walking away with more change than we know we’re owed, we can see our actions as harmless, equitable, or even — in some cases — for the greater good.

“It’s all about the ability to rationalize dishonesty,” he said. “You can do it as long as you cheat just a little.”

But Ariely also shared results of experiments that could tilt our behaviors in a more honest direction. He recounted experiments in which he and his colleagues asked one group of study participants to recall the Ten Commandments, and the other group to recall 10 books they had read in high school. The latter group largely engaged in widespread but moderate cheating when given subsequent reward-based tasks designed to measure honesty. But the group that recalled the Ten Commandments didn’t cheat at all. The result was the same when they reran the experiment on a group of self-declared atheists who were asked to swear on the Bible.

Look for more details of Ariely’s address in the Convention issue of the Observer, available this summer.