News > Minds on the Road > Signs That Make Us Blue, But Safe 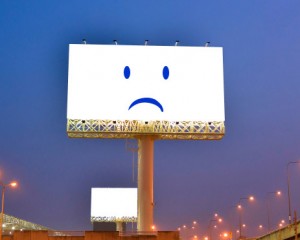 You approach an intersection just as the traffic light is turning yellow. Your decision to either barrel through or hit the brake may hinge on the last billboard you saw.

On any car trip, visual stimuli ranging from accident scenes to billboards can evoke emotions. We may feel saddened when passing by a roadside memorial, or cheered by a billboard advertising our favorite fast-food restaurant. And new research suggests that negative stimuli (i.e. scenes that make us angry or sad) are particularly strong deterrents to hazardous driving.

A research team in Spain set out to identify how emotion-laden stimuli on roadways affect drivers’ risk perception and decision-making. They theorized that drivers who saw negative images would be less risk-prone, because the dire consequences would become more salient.

Led by Alberto Megías of the University of Granada’s Department of Experimental Psychology, the scientists recruited college students to participate in a computer-simulated motorcycle ride on an urban road. In the simulation, the participants operated a motorbike at an average cruising speed of 50 kmh.  In more than 240 trials, the participants saw prominently displayed billboard advertisements—designed to evoke different emotions—before they approached an intersection, where a green traffic light was about to turn yellow.

Some virtual billboards were designed to evoke negative emotions. For example, they depicted mutilations similar to those used in actual road safety campaigns. Other billboards showed romantic scenes akin to cosmetics ads. And some showed neutral illustrations of object such as a chair or book.

Participants were told that the rider was a courier whose aim was to arrive at his or her destination as soon as possible in order to earn points. If the vehicle crashed, (with, say, a car crossing the intersection) the participant would lose points.

Some participants had to decide to speed up or brake before the yellow light turned red. Others were simply tasked with being observers, and evaluated whether or not the motorcycle operator had time to cross the intersection before the light turned red.
Megías and his team found that riders sped up to cross the yellow traffic light in more than half the trials, but were less likely to do so if they had just seen a negative billboard. Those participants who did speed up (or who said there was time to cross) when approaching a yellow light made their decision faster after seeing negative ads compared to participants seeing positive or neutral stimuli.

A possible explanation for that quicker response time, the researchers assert in the journal Transportation Research F, is that “[participants had the belief that speeding-up earlier could avoid a possible crash in the intersection.”

Additionally, evaluators who saw the negative ads were less likely to believe there was adequate time to cross the intersection against a yellow light — and were overall faster in making a judgment — compared to those exposed to positive or neutral ads.

Megías and his collaborators acknowledge prior research showing that emotional stimuli on roadways can distract drivers. But they say their results suggest that billboards promoting road safety should be located around tollgates, gas stations and others spots that demand less of the drivers’ urgent attention.

News > Minds on the Road > Signs That Make Us Blue, But Safe