Even in the most egalitarian of working environments, certain people seem to reliably move to a higher status than others. They seem more competent and committed. In essence, they appear to be natural leaders. 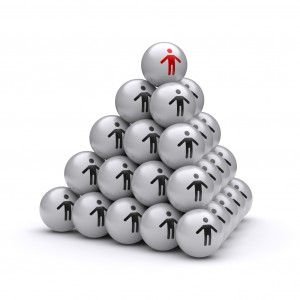 Gavin Kilduff, an assistant professor of management and organizations at New York University, and Adam Galinsky, a psychologist and professor at Columbia Business School, suspected that individuals’ thoughts and feelings when first entering a group would determine their long-term status within that group. They proposed that individuals who happen to be feeling energetic and confident as they enter a new group might show greater initiative during initial group discussions, thus appearing more competent to their teammates and consequently achieving a higher rank.

Kilduff and Galinsky tested these ideas in a series of experiments.  In the first, they randomly assigned college students to one of three conditions. Subjects in the first group were asked to write at least two paragraphs describing their aspirations and ambitions. This was the promotion-focused condition.  A second group of participants was assigned to the prevention-focused condition, and were asked to describe the duties and obligations they had to fulfill in their lives.  In the third, neutral condition, participants were asked to simply describe their commute to campus that day.

The participants were then assembled into same-sex groups of three, with each group including one participant from each condition. Each group worked together on a task in which they were to create a hypothetical startup company. They had to rank order the importance a set of 13 items (employees, company name, industry contacts, etc.) within 20 minutes.

Afterward, the subjects took a survey in which they rated the extent to which they respected and admired each other, and the amount of influence each of their teammates had over task decisions.  They were also asked to rate their own initiative within the group, as well as the initiative of each teammate.

As the researchers predicted, the individuals who were first assigned to the promotion-focused condition subsequently achieved higher group status, and were rated by their peers as behaving more proactively, than did those in the prevention-focused and neutral groups.

In the follow-up studies, they found that feeling powerful or happy when you entered a group not only led to immediate increases in status, but that this effect endured over subsequent group meetings, long after the writing task would have receded. Why? The person entering into the group, having just been primed with power, acted more assertively in the first few minutes, according to video tape coding. This set up patterns of communication that persist in the future. That early assertiveness becomes self-reinforcing within the group. Think about happiness, ideals, or power when you enter into a new group, and you will still have status days later due to the precedent setting assertiveness.

Reporting on their findings in July in the Journal of Personality and Social Psychology, Kilduff and Galinsky say further research should explore these approach-oriented states in other contexts and cultures. But they add that their findings unveil some of the randomness of organizational hierarchy.

“Much as prior research has shown how attributes that may be unrelated to competence or value—race, height, personality—can determine status,” they write, ”our work establishes another way in which those at the top of the hierarchies may not always represent the best and brightest.”