Exercise Does a Body – and a Mind – Good

We’ve heard it time and time again: exercise is good for us. And it’s not just good for physical health – research shows that daily physical activity can also boost our mental health. But what actually accounts for the association between exercise and mental health? A new article in Clinical More

Improving Memory for Specific Events Can Alleviate Symptoms of Depression

Hear the word “party” and memories of your 8th birthday sleepover or the big bash you attended last New Year’s may come rushing to mind. But it’s exactly these kinds of memories, embedded in a specific place and time, that people with depression have difficulty recalling. Research has shown that More

Clinical Science Training and Beyond

Two sessions in the Clinical Science Forum at the 24th APS Annual Convention explored critical issues facing clinical psychologists. One session focused on education and the efforts that training programs are making to equip future clinicians with the skills they need to evaluate  and implement evidence-based interventions. During the second More

His name may not appear in bold face in a celebrity magazine, but for students and seasoned professionals alike, Alan E. Kazdin inspired some of the same awestruck reactions as the arrival of a rock star. Cameras appeared. Fans gathered. But Kazdin is a genial, accessible, modest and intellectual rock More

Memories of a Child Refugee

The Huffington Post: For many, Sharbat Gula was the face of refugee children everywhere, although her identity was unknown for almost two decades. Captured by National Geographic photographer Steve McCurry in 1984, in a refugee camp in Pakistan, the penetrating eyes of the 12-year-old “Afghan girl” grabbed the world’s imagination More 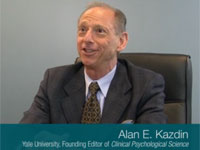 Founding Editor Alan E. Kazdin wants APS’s newest journal, Clinical Psychological Science (CPS), to be a multidisciplinary, interdisciplinary, international publication that draws from a variety of fields and methods. “It’s not that we want diversity for diversity’s sake,” Kazdin says. “We want to solve problems, and that’s what requires the More