Elaine F. Walker’s influence can be measured in her stellar publishing records, her many awards, and the number of her former students who have gone on to acclaimed research careers of their own. At the 25th APS Annual Convention, Walker received the 2013 APS James McKeen Cattell Fellow Award. In More

Teenagers are famously self-conscious, acutely aware and concerned about what their peers think of them. A new study reveals that this self-consciousness is linked with specific physiological and brain responses that seem to emerge in adolescence. “Our study identifies adolescence as a unique period of the lifespan in which self-conscious More

This year marks a milestone for APS — our 25th anniversary. The milestone was celebrated at the 25th APS Annual Convention with a birthday party and concert featuring APS’s super group, which includes recording artists and featured psychological scientists Daniel J. Levitin and APS Past President Robert W. Levenson, who More

While effective learning strategies are integral to improving student outcomes, many students’ favored learning techniques flunk the test. That was the verdict from Elizabeth J. Marsh of Duke University, as she presented her research team’s findings at the fifth annual Psychological Science in the Public Interest (PSPI) Symposium at this More

Scientific American: Can you train someone to be a nicer person? A recent study using meditation techniques shows that it might be possible. The research is published in the journal Psychological Science. [Helen Y. Weng et al, Compassion Training Alters Altruism and Neural Responses to Suffering] One group of subjects More 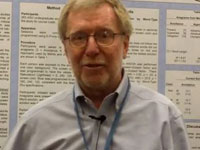 Failure to Replicate the Mehta and Zhu (2009) Color Effect

Mehta and Zhu (2009) reported several studies in Science on the effects of the colors red and blue over a series of cognitive tasks. Red was hypothesized to induce a state of avoidance motivation which would cause people to become more vigilant and risk-averse in a task. Blue was hypothesized More