Recovering alcoholics are generally counseled to stay away from “people, places and things”—anything, that is, that might be a cue for drinking. Bars are an especially potent trigger for the cravings that can lead to relapse. Yet sober alcoholics vary greatly in their susceptibility to such social cues. Many appear More

Researchers have identified a genetic variation that may explain why Individuals diagnosed with anxiety disorders are quick to learn to fear a stimulus but have a difficult time getting rid of that fear. More

There are several human characteristics considered to be genetically predetermined and evolutionarily innate, such as immune system strength, physical adaptations and even sex differences. These qualities drive the nature versus nurture debate and ask of our species, who is more successful and why? Psychologists Agneta Herlitz and Jenny Rehnman in More 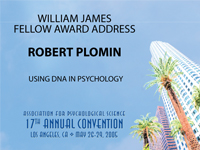 Last April, scientists announced the completion, with greater than 99.99 percent accuracy, of the Human Genome Project, the culmination of a publicly funded, 13-year international effort to sequence the three billion DNA letters contained in the human genome. Now behavioral and social scientists are being tapped to address the issues More

It started out of politeness. The visiting professor’s seminars on “behavior genetics” weren’t compulsory, Michael Galsworthy recalls, “but I went out of politeness, often late and smartly dressed.” That was in 1998. The London-born student was completing his undergraduate work in Nature Sciences at Cambridge University and going on job-seeking More