Publications > Observer > Observations > Worried? Get Your Scrub On 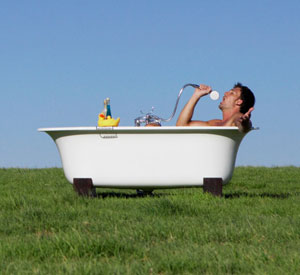 Global Handwashing Day (October 15, 2011) may be on to something! If you’re feeling guilty or doubtful, simply washing your hands or taking a shower may make you feel better. In a literature review published in Current Directions in Psychological Science, Spike W.S. Lee and Norbert Schwartz concluded that “people can rid themselves of a sense of immorality, lucky or unlucky feelings, or doubt about a decision” by cleaning themselves.

In one study, scientists found that people asked to judge the moral wrongdoing of others saw them as worse when exposed to an unkempt room or bad odor than when sitting in a clean room. In another study, participants asked to think of a moral wrongdoing of their own felt less guilty after using an antiseptic hand wipe.

The mental effects of being clean may also have a downside. The “clean” participants in one study not only judged others more harshly, they judged themselves as more moral than others. Furthermore, washing one’s hands after reminiscing about a positive event limits the warm glow of happy memories, leaving people less satisfied.

These insights may explain spiritual rituals such as baptism and immersion in a Mikveh, and  they affirm the cultural influence of famous hand washers from Lady Macbeth to Pontius Pilate: washing our hands really is about more than germs.

If you’re interested how cleaning our bodies can affect our mental states, read coverage from US News and World Report, The Huffington Post, and The Daily Mail.

Publications > Observer > Observations > Worried? Get Your Scrub On