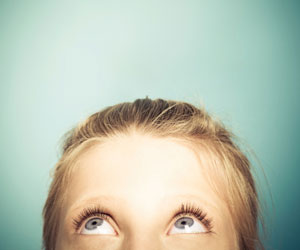 We are continuously flooded with sensory information from our physical environment – the sights, sounds, smells, feel of everything around us. We’re flooded with so much information, in fact, that we’re not consciously aware of much of it.

“Considering that people are continuously presented with vast amounts of sensory information, a system is needed to select and prioritize the most relevant information,” Surya Gayet and colleagues write.

The researchers surmised that, in the case of vision, visual working memory (VWM) may be that selection system.

Given that VWM is used to actively retain information for upcoming goal-directed behavior, it seems likely that it would also play a role in selecting the information that is relevant to, and prioritized for, conscious access. Gayet and colleagues investigated their hypothesis in a series of experiments.

In the crucial experiment, participants were shown two colored patches and were instructed to remember one of them. Participants then saw a target item, presented in the remembered color or the other color, in one eye. They were simultaneously presented with a dynamic pattern in the other eye.

The dynamic pattern had the effect of masking the target item, making it temporarily invisible to the participants. The researchers wanted to see how long it would take for the participants to detect the masked target.

Data showed that those targets that matched the color held in VWM reached visual awareness faster than targets of another color. And data from subsequent experiments confirmed the findings from the first.

Together, the findings suggest that the content of VWM can affect how visual information is processed, before it’s even accessible to conscious awareness

“The results of the present experiments suggest that VWM might well play [a selection] role in human consciousness,” Gayet and colleagues explain. “It funnels down the incoming sensory information to that which is relevant for imminent goal-directed behavior.”

According to the researchers, these findings shed light on a functional link between visual awareness and VWM: