Publications > Observer > Observations > To Call a Player’s Poker Hand, Look to the Arms 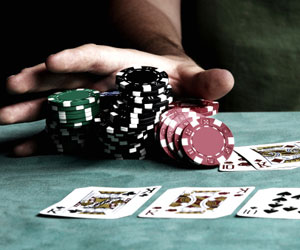 Professional poker players rely on the ability to divorce their facial expressions from their emotional state – no matter how good, or how bad, their hand is, they have to maintain an inscrutable “poker face.” But new research suggests that they may do well to focus on another body part: The arms. The research, published in Psychological Science, suggests that homing in on only the player’s arms may be the most reliable way to call a bluff.

Psychological scientist Michael Slepian and colleagues had 78 undergraduate participants watch two-second video clips from the World Series of Poker. Participants were shown one of three views: only the players’ faces, only their arms, or their entire upper bodies. In no cases were the participants shown what cards the players actually held – they had to size up the quality of the players’ hands based only on the view they saw.

When observing only the players’ faces, participants weren’t very accurate in intuiting the quality of the hand, with accuracy worse than chance. These results suggest that the pros are adept using their facial expressions to deceive others.

When viewing the players’ entire upper bodies – as one might do in a real-life poker game – participants were only able to judge the quality of the hand at about chance level.

Surprisingly, participants who saw only the professionals’ arms while making bets were best at predicting the quality of the concealed hand.

Slepian and his team of researchers reasoned that placing bets with confidence might be the giveaway:

“Players who have strong poker hands should be more confident than players who have weak hands,” they explained. “If greater confidence in players relates to smoother motor action, smoothness judgments might also predict likelihoods of winning.”

Another experiment seemed to confirm the researchers’ hypothesis: Participants’ ratings of the pros’ confidence and the smoothness of their arm movements predicted the quality of their poker hands.

It seems likely that, while stoic faces don’t give away a self-assured player’s hand, a certain suaveness in the arm movements might.

Publications > Observer > Observations > To Call a Player’s Poker Hand, Look to the Arms