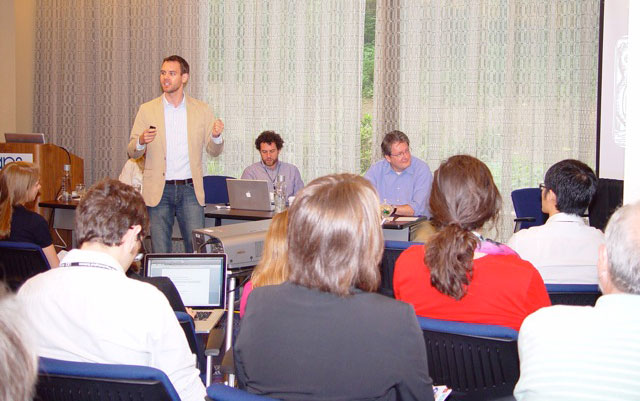 Deception, threats, violence - why do some individuals frequently engage in immoral behaviors like these while others never do?

Morality is not a universal constant. For example, why would the government of Spain give human rights to chimps in 2007, yet other governments continue to hand out licenses for hunting seal pups? In a symposium today, three researchers discussed their efforts to investigate individual variation in morality.

One way to account for differences in morality is genetics. Abigail Marsh, a researcher from Georgetown University, shared her latest results from a study where she and her team correlated genetic alleles for a serotonin transporter called SLC6A4 with participants’ responses to moral scenarios. Participants were asked to respond to dilemmas with various outcomes. The results indicated that people who were homozygous for the long allele of the gene found the “forseen harm” scenarios to be more acceptable than people who were homozygous for the short allele. In other words, people with the short allele thought it was less acceptable to passively hurt an innocent person (i.e., allow a boulder to run over a person) even if it saves more people.

Another potential source of variation is the mind, or mind perception as Kurt Gray from the University of Maryland puts it.

“Mind is a matter of perception,” says Gray. “Because we can’t directly experience another person’s mind, we have to infer it.”

Mind perception refers to a person’s ability to perceive another person’s mind and to imagine what type of mind it is. Gray showed results from a study where people were asked about the “minds” of individuals like an adult woman, a baby or Superman as well as other entities like animals, God, or a dead person. According to Gray, people were more likely to categorize babies and animals as having “less responsible” minds than adults.

Brain activity might also be a way to parse out differences in morality. Joshua Greene from Harvard University shared data from an fMRI study where people were given the opportunity to lie about the results of a coin flipping test. After sorting the participants into “dishonest”, “honest” and “ambiguous” categories, Greene showed that the dishonest participants had distinct activation in the control system of their brains when they chose to lie. Honest people, however, did not have a distinct pattern when they chose to be honest. These results suggest that honest people do not struggle with temptation when they are given an opportunity to lie.

Overall, there is no simple answer to account for differences in human morality. There’s no single brain area that scientists can point to as the source of a person’s conscience or moral reasoning. Morality is complex, and it’s no surprise that the science is the same.

Morality is simpler than suggested.
Experience, the current moment and what an individual expects to happen (as a result of exp and current moment) creates perception and therefore morality.
Brain plasticity alone can explain an individuals moral orientation. If positive reinforcement is placed on a given stimulus/multiple stimuli, then it is likely that the subject will seek this interaction, or something that represents it, within his/her environment.
Other species experience this as well. I compare dangerous/hostile/agressive behaviour to insecurity and paranoia typical to that of an animal in the wild. In the sense that the individual must engage with its environment with the perception that it is constantly in defense mode. An organism that is placid and relaxed is the opposite, it would have had experience that has allowed it to become confident enough to remain much more directed.
A domestic animal can also refer to humans that live with thought and consideration for others. They have learned that approaching a situation without an initial emotional response will yield much safer and efficient methods. Even without consideration or that ability, good training and correct environmental interactions will see any organism behaving with little to no hostility.
The perceived necessity to become hostil is purely forged through experience. Genetics increase the chances, only slightly. Genetic traits are not a sure thing, as an organism constantly evolves to deal with its environment, when behaviour becomes consistent, change is drastically slowed. If the environment changes, so does the organism.
The brain changes rapidly, obviously, so understanding and categorising environmental pressures will be far more effective.
Environmental pressures/stimulus can be put into genres, emotions as well and then the intensity of each. Observing an individuals response to a given kind of stimulus, will instantly give an inderstanding of its history and allow very precise behavioural predictions.
For instance, if the stimulus is intense violence and the individual responds with violence, it is safe to imply that it has defended itself successfully in a physical manner. If it retreats, it is likely that a previous attempt at defence was unsuccessful. Also, the intensity in which an individual responds also gives a direct understanding.
More success = more confidence. Less, etc.
Very simple.