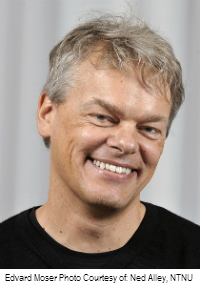 Three European psychological scientists will share the for their work discovering the brain’s “GPS system.”

John O’Keefe (University College London) and husband-and-wife team May-Britt Moser and Edvard Moser (Norwegian University of Science and Technology) are being awarded the prize in recognition of their basic research on memory and cognition that has contributed to our understanding of how the brain situates us in our physical environment and guides us from one place to another.

The Karolinska Institute in Sweden, which awards the Nobel Prize, said the three scientists have “solved a problem that has occupied philosophers and scientists for centuries — how does the brain create a map of the space surrounding us and how can we navigate our way through a complex environment?”

In 1971, O’Keefe identified nerve cells in the hippocampi of rats’ brains that were always active when the rats were in a specific location. These “place cells” register not only what the rats see, but also what they do not see, giving them a complete picture of their surrounding environment.

In 2005, May-Britt Moser and Edvard Moser, who had worked with O’Keefe as visiting postdoctoral fellows in his laboratory, pinpointed another important component of the brain’s navigation system by identifying a second type of nerve cell, the “grid cell,” which assists the rats with positioning and coordination. As the rats moved about a laboratory, these cells, located in the entorhinal cortex of the brain, lit up in unique hexagonal patterns depending on the rats’ location. 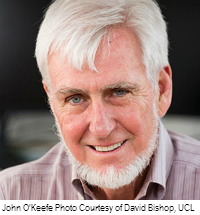 These results, paired with O’Keefe’s earlier discoveries, showed “how both ‘place’ and ‘grid’ cells make it possible to determine position and to navigate,” according to the Nobel committee.

The findings help to explain a fundamental aspect of how we interact with our surrounding environment in everyday life, but they may also have important implications for research on Alzheimer’s disease and other neurological diseases marked by loss of spatial reasoning. Edvard Moser says the cells the group has been studying are in two of the regions of the brain affected early on by Alzheimer’s disease: the hippocampus and the entorhinal cortex.

The three psychological scientists have been recognized by many scientific organizations and foundations for their groundbreaking research. Together, the three researchers were awarded Columbia University’s Louisa Gross Horwitz Prize for outstanding basic research in biology or biochemistry in 2013. 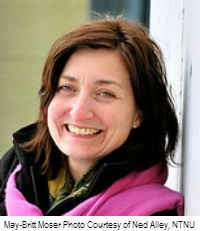 May-Britt Moser and Edvard Moser, who both received undergraduate degrees in psychology and doctoral degrees in neurophysiology from the University of Oslo, were also awarded the Perl-UNC Neuroscience prize in 2012 for their work on memory and spatial representation and the Karl Spencer Lashley Award in 2014 recognizing work on “the integrative science of human behavior.”

O’Keefe, who received his doctoral degree in physiological psychology from McGill University, was honored in 2006 with the Grawemeyer Award in psychology for his work on the brain’s mapping system. In 2014, he was a co-recipient of the Kavli Prize in Neuroscience from the Norwegian Academy of Science and Letters in recognition for his contributions to the “discovery of specialized brain networks for memory and cognition.”

While there is no Nobel Prize awarded specifically for psychological science, psychology researchers have been awarded a Nobel in other categories. In 1978, Herbert A. Simon (then at Carnegie Mellon University) won the Nobel Prize in Economics for his work on “the decision-making process in economic organizations.” And in 2002, Daniel Kahneman (Princeton University) won the Nobel Prize in Economics in recognition of his integrative work investigating human judgment and decision making under conditions of uncertainty.