The open practices badge program encourages authors to engage in open research practices and was devised in partnership with the Center for Open Science. Articles accepted for publication in Psychological Science are awarded badges for meeting any or all of the following criteria:

Open Data The experiment’s data were submitted to an open-access repository.

Open Materials The experiment’s materials were submitted to an open-access repository.

Preregistration The study’s results were reported according to an open-access design and analysis plan formulated prior to data collection.

For an example of badges in action, see Colby, DeWitt, and Chapman (2015), the most recent article to be awarded all three badges.

These open practices are aimed at improving research quality and enhancing reproducibility, and yet they often go unrewarded.

“Despite the importance of open communication for scientific progress, present norms do not provide strong incentives for individual researchers to share data, materials, or their research process,” said Eric Eich, Past Editor in Chief of Psychological Science. 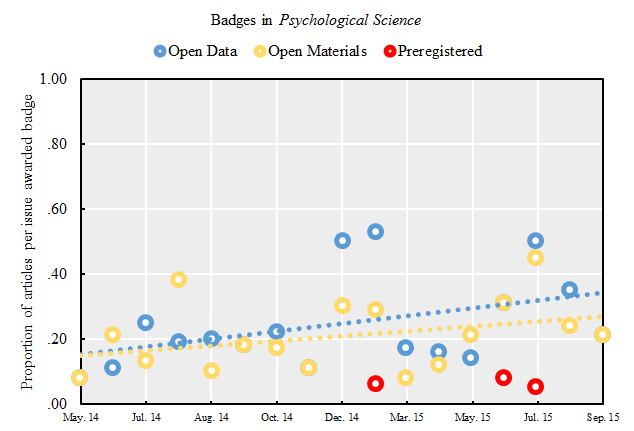 The proportion of articles awarded badges for Open Data or Open Materials seems to be on the rise, though these trends aren’t statistically significant. Several years’ more data would be needed to detect a moderate effect, but initial evidence hints that adoption rates might be moving in a good direction.

Either way, it’s clear that conducting research consistent with open practices is now a popular approach for many authors who publish their work in Psychological Science.

APS Fellow Jennifer Tackett, incoming editor of Clinical Psychological Science, discusses psychology as an interdisciplinary “hub science” and the importance of opening up that science to new voices.