Publications > Observer > Observations > The Many Faces of Network Analysis 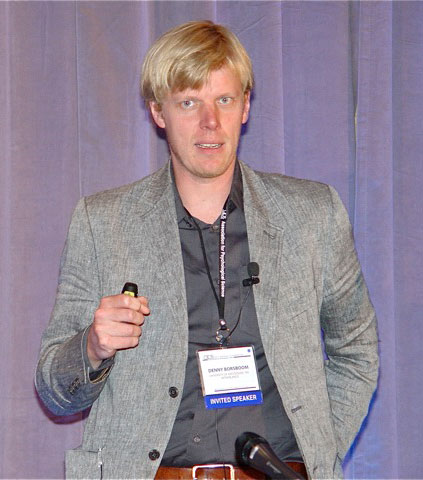 Denny Borsboom from the University of Amsterdam speaking at one of Friday's theme programs, Connected.

Psychometrist Denny Borsboom from the University of Amsterdam kicked off the program talking about networks he and his team generated using categories from the Diagnostic and Statistical Manual of Mental Disorders. In addition to creating networks that show how symptoms from different mental disorders are connected, Borsboom has also developed symptom networks for individuals.

“You can now think of people as having different network structures,” says Borsboom. “And if you follow them over time, a new window for investigating disorders opens up.”

Turning the focus to the connections among individuals, Giuseppe LaBianca—a researcher from the University of Kentucky—shared his investigations of social networks. Using networks to study gossip, LaBianca has found that frequent gossipers tend to be influential in work environments, but they also receive lower performance evaluations. And guess who the biggest gossips are? It’s the managers, not the secretaries.

The final speaker, Olaf Sporns from Indiana University at Bloomington, took the discussion into the field of neuroscience and discussed recent efforts to map the connections in the human brain, i.e. the human connectome. According to Sporns, there have been advances in linking together functional and anatomical features of the brain, but the current map is like a map of the world from the 1600s—some areas have a lot of detail (like Europe), and others are still a mystery (the Americas).

“The theme of convergence is absolutely crucial for understanding or predicting the future of where our science is going,” says Mischel. “We are now entering the next—or maybe already beginning the next—mind-brain science revolution”

Mischel also discussed his hopes that network analysis could be used to study individual differences (or traits). The current methods, he believes, are “spectacularly wrong” and trait psychology could be yet another discipline that could benefit from studying networks.

Publications > Observer > Observations > The Many Faces of Network Analysis